What To Do Next 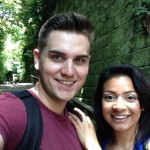 My nephew, Allen is his Grandpa Spencer’s namesake. He was named Allen Spencer Beach, so that our dad’s name would be carried on for another generation, in the only way that a family of daughters could give him a namesake. While his name tied him to his grandpa, he also followed his dad’s lead, and joined the navy. Now he is a Corpsman. He has spent time at Bethesda Naval Hospital, and he is currently stationed in Yokosuka-shi, Kanagawa, Japan, at the Yokosuka Naval Base. He went to Japan in September of 2012, and has a little less than a year left in the Navy, and while he has enjoyed Japan, and feels like it has been a great opportunity, he is nevertheless ready to come back to the United States. His time in Japan has not been a lonely time however, because he met a lovely girl there named Gabby. She is also in the Navy and is a Corpsman, so they have a lot in common. They have been dating for about a year now, so we will see where that leads. Gabby is from Oregon, so where Allen will end up could be tied to how that relationship goes, but Allen has pretty much decided to go to college when his time in the Navy is done. When his mom, my sister, Caryl and her husband, Mike visited Allen in Japan in August, he and Gabby showed them all the sights, navigating the train system there like experts, even though everything was written in Japanese.

Allen is very much into photography, and has taken some amazing photographs. He has a real eye for it…one that few people possess. I particularly like the one he took of himself walking away from the camera, and holding another camera. I really wish I had saved that one, because it would have been a great one to use here. I think Allen could go into photography as an occupation, perhaps as a journalistic photographer, if that was what he decided to do.

But, Allen’s interests lie in a different direction right now, and oddly enough, that is similar to 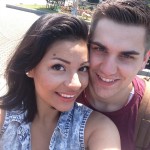 yet another relative in the family…Louis Emery Freese. While they are not blood relatives, because Louis married into our family, they share an interest in making instruments, like the guitar and violin. Louis imported his wood from Germany to make the violins he made. Crafting instruments is a wonderful skill to have, and not only would it be profitable, but it would be very rewarding too. Those instruments are beautiful works of art. The craftsman who has the skill to make those instruments has a great skill indeed. Allen says that would be his dream occupation. I hope he is able to realize that dream. Today is Allen’s birthday. Happy birthday Allen!! Have a wonderful day!! We love you!!