What’s In A Smile 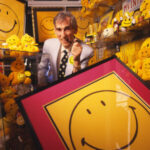 Harvey Ball was a commercial artist from Worcester, Massachusetts. You may not know him, but everyone knows what he created…the smiley face. Harvey Ross Ball was born on July 10, 1921 the third of six children to Ernest G Ball and Christine “Kitty” Ross Ball. Ball’s artistic skills presented early. As a student at Worcester South High School, he decided to become an apprentice to a local sign painter. Later he attended the Worcester Art Museum School, where he studied fine arts, however, it was not in the fine arts that Ball’s fame emerged. He is recognized as the designer of a popular smiley graphic picture, which became an enduring and notable international icon.

Ball worked for a local advertising firm after World War II. Then he decided to start his own business, which he called Harvey Ball Advertising, in 1959. He designed the smiley in 1963. The State Mutual Life Assurance Company of Worcester, Massachusetts, now known Hanover Insurance, had purchased Guarantee Mutual Company of Ohio. After the merger, employee morale was pretty 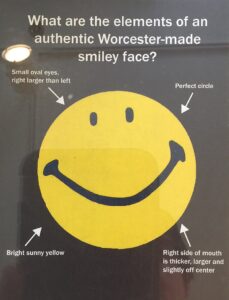 low. The company decided to try to boost morale, so they asked Ball to come up with an image that would help. What he created was a smiley face, with one eye bigger than the other. The creation took Ball ten minutes, and the executives liked it immediately. They paid Ball a mere $45 for his creation.

The smiley face became part of the company’s friendship campaign, and State Mutual handed out 100 smiley pins to employees. The aim was to get employees to smile while using the phone and doing other tasks. The buttons became popular, with orders being taken in lots of 10,000. More than 50 million smiley face buttons had been sold by 1971, and the smiley has been described as an international icon. As for Ball, well…he never applied for a trademark or copyright of the smiley and that $45 was all he ever got for his trouble. I don’t suppose that did much for his morale. Nevertheless, State Mutual didn’t make any money from the design either. According to Ball’s son, Charles, his father never regretted not registering the copyright. Charles Ball said, “he was not a money-driven guy, he used to say, ‘Hey, I can only eat one steak at a time, drive one car at a time.'” 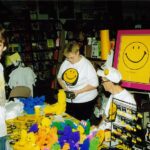 Ball had a heart for children, and founded the World Smile Foundation in 1999, a non-profit charitable trust that supports children’s causes. Then, he came up with World Smile Day. It was a great idea, I think. How nice it is to celebrate a day dedicated to putting a smile on your face and sharing that great smile with others. The first World Smile Day was celebrated in 1999. It’s been held annually on the first Friday of October since then. After Harvey died in 2001, the “Harvey Ball World Smile Foundation” was created to honor his name and memory. The slogan of the Smile Foundation is “improving this world, one smile at a time.” The Foundation continues to be the official sponsor of World Smile Day each year. We should all consider that slogan.