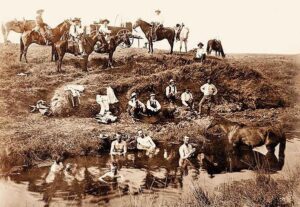 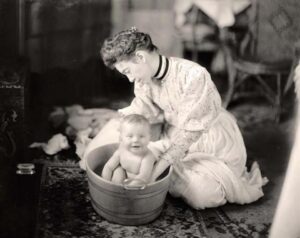 These days, we know that washing our hands and our bodies is important to good health. Of course, washing of hands cleans away dirt, germs, and bacteria, as well as many viruses that cause disease, but in the Old West, there were actually people who thought that bathing could actually make you sick, therefore bathing did not occur on a daily basis in the wild west. I’m sure you can imagine just how stinky things got. I suppose that if two people got very near each other, it would be a competition to see who smelled the worst. The reality is that we have all encountered someone who really needed a bath. Most of us would never tell that person that they stunk, but we might really hope that this wasn’t going to be the norm, or we might have to rethink the friendship.

Women in the old west “bathed” a little more often than the men, if you could exactly call it that. Mostly any daily bathing would consist of a pitcher of water and a washcloth, with the ritual performed in the bedroom of the home. Men on the cattle trail might take a plunge into a watering hole to get “cleaned up”, and quite often the bathing and the laundry would happen at the same time, meaning that a good portion of the body didn’t really get scrubbed up. Nevertheless, it was a good way to rid yourself of that nasty trail dust accumulated on the trail that day…or maybe the prior several days. This type of bathing might also involve armed guards to keep the Indians away.

To make matters worse, when people did bathe, it might be done in the kitchen in a large tub of water, used by the husband first, the mother second, and the children by ages on down the line. As you can imagine, the water got pretty black by the time the youngest child was bathed. Then the water was finally dumped. That is actually where the term, “don’t throw the baby out with the bath water came from.” Sometimes being the youngest had its perks, and other times not so much. Some people would go to public bathhouses, where they might actually have to pay extra for “clean” water, and the guy after them might end up using their water, if he didn’t want to pay the extra fee.

The fact that bathing was inconvenient, and for some, scary, made people sometimes resort to other methods 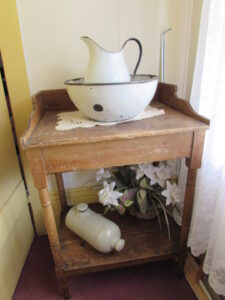 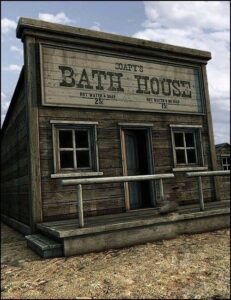 to rid themselves of the stinky odor. After all, lemon verbena wasn’t just a type of perfume. It helped to mask the odor that would come quickly with infrequent bathing. To make matters worse, people lived in primitive surroundings with lice, fleas and bedbugs, and the smell of their own dirty bodies drew flies and mosquitoes. Hopefully, the lemon verbena would help to keep the pests away…but I wouldn’t count on it really. I don’t think it masked the smell that well.