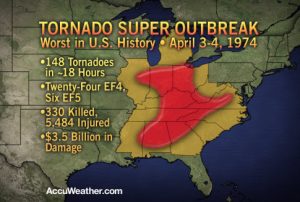 We all know that tornadoes are possible just about anywhere in the world…but in the United States, in an area well known as Tornado Alley, tornadoes are a common thing during tornado season, and sometimes outside of tornado season. Tornado Alley gets an average of more than 1,000 tornadoes a year, but on April 3, 1974, a super outbreak began. Over a less than 18 hour span, 148 tornadoes touched down across 13 states, with 21 in Indiana. The tornadoes hit North America from Georgia to Canada within 16 hours. At times there were as many as 15 separate tornadoes on the ground at one time. The Super Outbreak affected a total of 11 US states and Ontario in Canada. The Monticello tornado, which occurred during the weather event, tracked a whopping 121 miles, he longest tornado track in Indiana history! The 1974 tornado outbreak held the record as the largest outbreak in US history, killing 330 people…until the 2011 tornado outbreak, during which 360 tornadoes touched down killing 337 people. 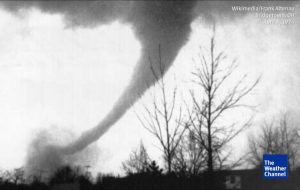 The outbreak began when a powerful low pressure system developed on April 1st, across the North American Interior Plains. As it moved into the Mississippi and Ohio Valley areas, a surge of very humid air intensified the storm further, and there were sharp temperature differences between both sides of the system. The National Weather Service began forecasting a severe weather outbreak on April 3, but no one expected the severity of the outbreak that actually occurred. Several F2 and F3 tornadoes struck portions of the Ohio Valley and the South in a separate, earlier outbreak on April 1 and 2, which included three killer tornadoes in Kentucky, Alabama, and Tennessee. The town of Campbellsburg, northeast of Louisville, was hard-hit in this earlier outbreak, with a large portion of the town destroyed by an F3. Between the two outbreaks, an additional tornado was reported in Indiana in the early morning hours of April 3, several hours before the official start of the outbreak. On Wednesday, April 3, severe weather watches already were issued from the morning from south of the Great Lakes, while in portions of the Upper Midwest, snow was reported, with heavy rain falling 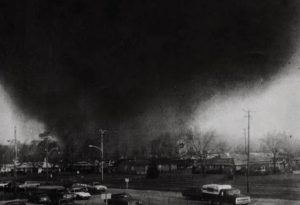 across central Michigan and much of Ontario, which also had tornadoes.

Perhaps the most shocking fact from the 1974 outbreak was the amount of F4 and F5 tornadoes…with an incredible 30 (23 F4s and 7 F5s). The 1974 outbreak featured 30 violent tornadoes in less than one day when the national average is only about 7 per year. All seven of the F5 tornadoes occurred on the 3rd, and Alabama was the state that experienced the highest number of F5 tornadoes that day…three out of seven. The other F5 tornadoes occurred throughout Kentucky, Indiana, and Ohio. these super outbreaks are some of the most shocking weather phenomena ever.