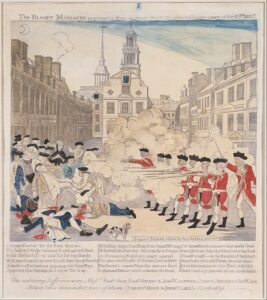 A mob of American colonists gathered at the Customs House in Boston, on the cold, snowy night of March 5, 1770. They called themselves Patriots, and they were there to protest the occupation of their city by British troops, who were sent to Boston in 1768 to enforce unpopular taxation measures passed by a British parliament that lacked American representation. I suppose it is possible that the colonists would have agreed to increase their taxes in an effort to help pay for the Seven-Year War, but the reality is that they were not asked…they were told, and it was to be forced upon them. They were not going tolerate that…so they would fight.

For their part, the British would also not be moved, and they were prepared to fight. British Captain Thomas Preston, the commanding officer at the Customs House, ordered his men to fix their bayonets and join the guard outside the building. The colonists…somewhat less prepared, responded by throwing snowballs and other objects at the British regulars. As the snowball fight commenced, Private Hugh Montgomery was hit, and not knowing what hit him, he discharged his rifle at the crowd. With that, the other soldiers began firing too, and when the smoke cleared, five colonists were dead or dying. They were Crispus Attucks, Patrick Carr, Samuel Gray, Samuel Maverick and James Caldwell. Three more were injured. Although it is unclear whether Crispus Attucks, an African American, was the first to fall as is commonly believed, the deaths of the five men are regarded by some historians as the first fatalities in the American Revolutionary War. After the massacre, the British soldiers were put on trial for war crimes. Strangely, patriots John Adams and Josiah Quincy agreed 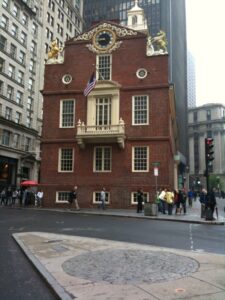 to defend the soldiers in a show of support of the colonial justice system. When the trial ended in December 1770, two of the British soldiers were found guilty of manslaughter. As punishment, their thumbs were branded with an “M” for murder. In my mind, that is such a minor punishment, for what we view as such a major crime. I’m not sure if I think that any of the British soldiers were really guilty of murder, or even manslaughter, because it seems to me that in a moment of panic, the soldier mistakenly thought he was in eminent danger, when in reality, it was simply a snowball. Still, the punishment really didn’t fit the crime for which it was given.

The Stamp Act was called the “Boston Massacre” by the Sons of Liberty, a Patriot group formed in 1765 to oppose it. The “Boston Massacre” was viewed as a battle for American liberty and just cause for the removal of British troops from Boston. Patriot Paul Revere made an engraving of the incident, depicting the British soldiers lining up like an organized army to suppress an idealized representation of the colonist uprising. Copies of the engraving were distributed throughout the colonies. This was to help reinforce negative American sentiments about British rule. The colonists needed as many in their ranks to be onboard with the battle, and so any depiction of the British as cruel slave masters would help.

The American Revolution officially began in April of 1775, when British troops from Boston fought with American militiamen at the battles of Lexington and Concord. The British troops were under orders to capture 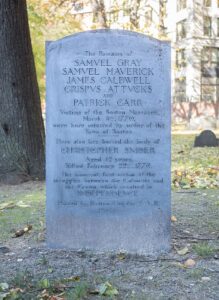 Patriot leaders Samuel Adams and John Hancock in Lexington and to confiscate the Patriot arsenal at Concord. Unfortunately for them, the Patriots were several steps ahead of them, and neither of the missions were accomplished because Paul Revere and William Dawes rode ahead of the British to warn Adams and Hancock and to rouse the Patriot minutemen.

The British forces were forced to evacuate Boston eleven months later, in March 1776, following American General George Washington’s successful placement of fortifications and cannons on Dorchester Heights. Oddly the eight-year British occupation of Boston ended with a bloodless liberation of the city. General Washington, commander of the Continental Army, was presented with the first medal ever awarded by the Continental Congress for the victory. It would be more than five years before the Revolutionary War came to an end with British General Charles Cornwallis’ surrender to Washington at Yorktown, Virginia.