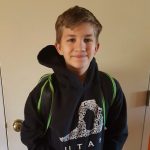 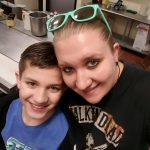 My grandnephew, Topher Spicer is a sweet boy, who is a great surrogate big brother to his mother, Andrea Beach’s friend, Nikki Vigil’s son, Marcus. They are both an only child, so their friendship is very important to them. He also has some best friends, Elias and Ethan, that he really enjoys hanging out with. His mom has taught him to play Uno, and of course he plays video games. Summertime is a great time to go swimming, and Topher goes just about every day.

Since Topher’s uncle, Allen Beach was stationed in Japan for part of his time as a corpsman in the Navy, Topher has become interested in Japanese culture. I don’t know if Topher is considering joining the Navy, or not, but if he did, he would follow in a line of Navy men in his family. Whether or not he is in the navy, Topher like some of the culture, and most likely the buildings and such.

Topher loves animals, and I’m sure that he hopes to have a pet some day. When he was visiting his great grandma, my mom, Collene Spencer, her cat was totally taken with him. That was an amazing thing, because Lewie, the cat, doesn’t like to be around most kids, but was totally content to sit beside Topher, and watch what he was doing…no matter what it was. I can understand that, because Topher is a child who is not overly rambunctious. He is content to sit and play a video game, and Lewie felt comfortable with him.

This past week, while my sisters, Cheryl Masterson, Caryl Reed, and I were on a trip to Washington, Topher 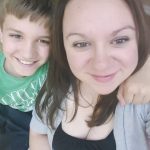 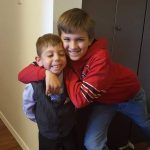 spent quite a bit of time with his grandpa, Mike Reed, while his mom had to work. They were just two men, batching it together, and supposedly waiting for Caryl to get back home again. I’m sure they missed her, but guy time is fun for them too. Sometimes having a guys week can really be a lot of fun, so I know that they had a great time. Whenever two guys get together and do all the things that only guys would appreciate, it’s a good time. I suppose you would have to be a guy to understand the guy things. Today is Topher’s 12th birthday. Happy birthday Topher!! Have a great day!! We love you!!