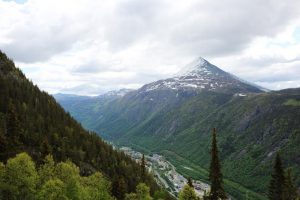 Anyone who finds Winter and the shortened nights depressing, can understand how a person can crave the sun. There is even a condition known as SAD (Seasonal Affective Disorder) that comes out of the limited or even lack of sunlight. People in Alaska and other areas near the pole regions often suffer from it in the dark winter days. The polar regions aren’t the only ones with the problem, however.

There is a tiny town in Norway, called Rjukan. For hundreds of years, the inhabitants of this tiny Norwegian town went without direct sunlight for almost half the year. It’s not because this town is situated near the North Pole, because it isn’t. Nevertheless, the place Rjukan is situated is the problem. Rjukan is wedged at the bottom of a steep east-west valley in southern Norway’s Telemark region. It’s surrounded by mountains, including the 6,178-foot-high Gaustatoppen.

Rjukan is a company town, founded for the employees of Norsk Hydro, an aluminum powerhouse that is still going strong today. At first the town built an aerial tramway, Krossobanen, to give employees and their families access to the winter sunshine. Sam Eyde, the founder of the town, began to consider building sun mirrors on the mountain as far back as 1913, but the tramway was built first. It was the first such system in northern Europe, and still functions today. The tramway served a purpose, but really didn’t solve the problem. 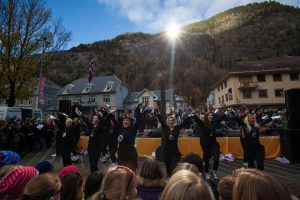 Still, the desire for the kind of direct sunlight first shared by Eyde never went away. Then, more than 90 years later, a local resident and artist, Martin Andersen took up the idea from the history books. He began to think that maybe the idea was a good one. So, on October 30, 2013, almost 100 years to the day when the idea was first presented, the Rjukan sun mirror officially opened. For the first time in the town’s history, the sun actually shown on the town in the winter months. The people were elated. At first, not everyone was on board with Andersen’s plans. Many locals criticized the $750,000 project, believing the money could be better spent elsewhere, but when they saw how excited everyone was with the day, it was hard to continue to be negative. The people put on sunglasses, and basked in the sun’s light and warmth. It was like a big party. The sun mirrors continue to be a big hit in the town, oddly in the summer, as well as the winter.

Local residents now enjoy an approximately 6,500 square foot ellipse-shaped beam of sunlight into the town square. Between 80% and 100% of the sun’s light is transferred down into the town. The mirror system has helped the tourism industry. It’s said, “This summer there were several tourists who turned their backs on the real sun, and sat instead with their faces to the sun mirror.” Locals and tourists can even hike to the mirrors. As 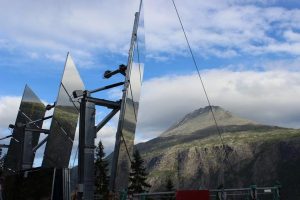 unusual as it may seem, Rjukan’s sun mirror system is not a world first. The small town of Viganella, in Italy’s steep Antrona Valley, celebrated its own day of the light in December 2006, as a sheet of steel was installed to reflect sunlight into the town square from November to February. The system in Rjukan is significantly more advanced, however. Each of the three 182 square foot mirrors are controlled computer-driven motors called heliostats. They track the movement of the sun across the horizon and constantly reposition the mirrors to keep the reflected light as consistent as possible. What a cool idea for a town and its people who can’t get easy access to the sun. 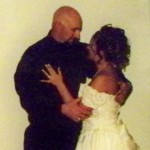 Ten years ago today, my niece, Jenny married her husband, Steve. Through the years, I have watched these kids grow into wonderful people. I have known both of them for so long…Jenny all her life, and Steve since he was 12 years old…so I have seen the changes they have gone through. I must say, that when they were kids, I wasn’t too sure how they would turn out, but that is the case with most teenagers. They drive you crazy, even if they aren’t your own kids, until that day when you suddenly realize that they have changed into great people. When did that happen? How did I miss the change? Was I just not looking? It makes no difference really, because suddenly they are people you respect and want to be around. They have suddenly grown up and become the people they were destined to be.

The last 10 years have brought much joy and some sadness into their lives, but Jenny and Stave have weathered the storms, and have come back into the sunlight. And through it all, they never lost faith in God…in fact, their faith has grown and grown. We all go through things in our marriage and in our lives, but it is what we do with the changes that determines who we will become. Jenny and Steve have become stronger and closer through everything. I have no doubt that they will grow old together, because they were meant to be together.

Happiness has grown in the decade they have been married. Their smiles and laughter are so good to see. They have a great love of life, and are always doing something. From football and other sports with the boys to snowmobiling and target shooting, they are 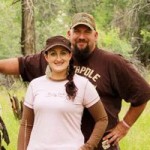 always on the go…something having children will do for you…keep you busy. But kids are also a blessing of years together, and being very busy just comes with the package.

A decade together. It is so hard to believe they have been married 10 years. It seems like just yesterday that they were planning their wedding. Time goes by so fast, and where once stood two kids, now stands a beautiful couple, who are a blessing to all those around them. They care about others, and it shows in all they do. Happy 10th Anniversary Jenny and Steve!! We love you both very much!! Have a wonderful day!!