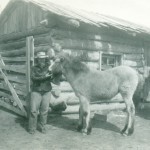 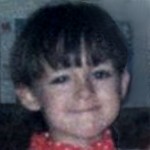 As our children grow into adulthood, it can be difficult to look at them in this new light. Sometimes, it takes much longer to realize that they are grown adults than perhaps it should take. It isn’t that they are immature, its just that we can’t get past the picture of that child that has lived in our minds all these years. And it doesn’t necessarily have to be your own children either. Nieces and nephews can seem like they just shouldn’t be grown adults…and yet they are. That’s the way I feel about my niece, Jenny. As a girl, Jenny was a teeny little princess type with a cute little smile. She rarely took anything seriously, but rather just liked to have fun. I know, pretty typical of a little girl. Yes, she was typical of little girls, but Jenny was going to become something  different…a faith filled woman.

Now, Jenny is grown and has a family of her own. Somehow, it has finally hit me I think, what a very special woman she is. She has been through so many things in her lifetime, and yet the woman I see before me is strong and charming at the same time. She doesn’t let the sadness or problems she faces 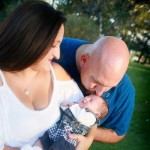 , define who she is, but rather turns to God to lead her everywhere she goes. As a teenager, like most teenagers, she just didn’t seem like she would have become this strong faith-filled woman, but now, here she is. It is an amazing transformation.

I think that you can tell what a person is really made of as you watch them walk through the trials in this life. Some people are broken by the trials, and some stand firm in their beliefs, and strong in their faith. Nevertheless, you wish there was a way to keep them from going through any trials at all, because you love them.  You can’t protect them from everything they will face in this world, but you can equip them with the necessary tools to see them through the trials of life…namely God. Now, as I see Jenny posting on Facebook about how happy she is to be going to church to worship the Lord, it makes me feel very proud of how much she has grown in the Lord.

The person Jenny is today is a direct result of the prayers of her mother. My sister, Cheryl, like 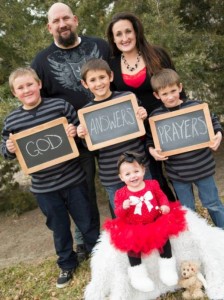 the rest of my sisters, my parents, and I, have prayed over our children. I can’t imagine trying to walk through this world without prayers being said over the journey, nor can anyone in the rest of my family. Jenny too, has learned that life must be handled with prayer, and that while sorrows may come, God still has a plan for you, and that miracles still happen today.  Those prayers brought Steve into her life, so they could walk the road of faith hand in hand. Jenny knows that God really does still answer prayer today, and when He heals your broken heart, it is in the most wonderful way. And she knows that while sorrows come, God will restore what is missing in their lives, back to them again. Today is Jenny’s birthday. While life has not always been easy for her…Jenny has come through it all, her faith intact and her joy complete, because she has her miracle. I’m very proud of her. Happy birthday Jenny!! Have a blessed day!! We love you!! 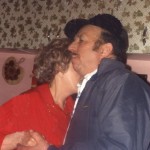 New Years Eve around our house always meant a party, because my mom’s birthday is January 1st. The party always included a dance in the kitchen, which we empty of all the furniture for the occasion. One of the highlights of the evening was when Mom and Dad would share a dance. It is one of the moments that I will always remember, as will my mom, I’m sure. It wasn’t New Years Eve until they had their dance. Their dance had the same importance on the evening as the bride and groom’s dance at a wedding, and the same feel. It almost brought a tear to your eyes, especially in those last two years, when we weren’t sure Dad and Mom would be able to have their dance.

New Years Eve was not, however, the only time when my mom and dad danced. I remember many times when Dad would come home from work, still in work clothes and the would share a dance in that same kitchen. It was one of their ways of expressing their deep and abiding love for each other, and one of the ways we, their children could enjoy the fact that our parents were and always would be in love.

That is what life can be compared to also…a dance. We don’t know the twists and turns life will take until we live them. We don’t know the hurts and loss we might have to endure. Every life has its sorrows, as well as its joys. In a life where the joy outweighs the sorrow, you find a very blessed person or persons. That is the kind of life my parents lived. Their dance was one of joy and happiness, and very little sorrow or loss was added to it. 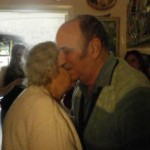 When I look back at all the pictures of trips we took, and places we got to go, our family’s dance was a great waltz, if you will, with a lot of country swing and a little bit of rock and roll mixed in. My cousin Bill commented on my dad’s life after his passing. He said, “Wow, he really lived!!” How true that is. My dad always made sure the dance of our life was a wonderful dance set to a beautiful song. Whether we were traveling, or just spending time in the back yard around a picnic table, or working together, he tried to add fun to every part of our lives. And the dancing continued until that last New Years Eve party, when we were blessed one last time with my parents special dance…the last dance.