I Will Fight No More Forever 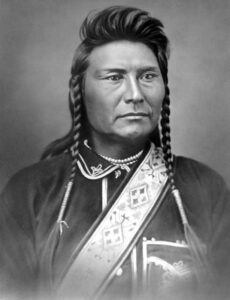 Nez Perce Chief Him-mah-too-yah-lat-kekt (“Thunder Rolling Down from the Mountains”), while chief of the Nez Perce Indian tribe, was not a warrior chief. Chief Joseph, as he was known to the “White Man” who could not easily pronounce his name, was much more diplomat than warrior, and he could see the writing on the wall. It wasn’t that he was a quitter or a traitor to his people, but rather that he could see that the government was going to take the fertile land his tribe occupied in northeastern Oregon, and they would kill them all, if necessary, to get what they wanted.

Chief Joseph was elected chief of the Wallowa band of Nez Perce Indians at the very young age of 31. The first six years were difficult as the young leader struggled peacefully against the whites who wanted the fertile land of Wallowa’s in northeastern Oregon. Things really heated up in 1877, when General Howard of the US Army warned the young chief that if the Wallowa and other bands of the Nez Perce did not abandon their land and move to the Lapwai Reservation within 30 days, his troops would attack. Chief Joe knew that the Indians would be severely outnumbered, and he hated the thought of all of his people being injured and killed, only to find out that the outcome was the same…the land would ultimately end up in the hands of the white settlers. While some of the other Nez Perce chiefs argued they should resist, Chief Joseph convinced them to comply with the order rather than face war, and he led his people on a perilous voyage across the flood-filled Snake and Salmon River canyons to a campsite near the Lapwai Reservation. 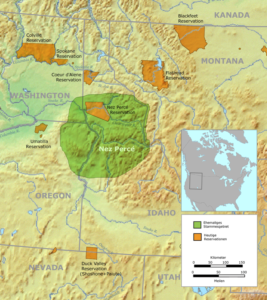 matters into their own hands. They exacted their “revenge” on some of the more offensive white occupiers in the region, sparking the Nez Perce War of 1877. The US Army’s pursuit of about 750 Nez Perce and a small allied band of the Palouse tribe, led by Chief Joseph and others, as they attempted to escape from Idaho became known as the Nez Perce War. The Indians had hoped to take refuge with the Crow Nation in the Montana Territory, but the Crow refused to harbor them, so the Nez Perce went north in an attempt to obtain asylum with the Lakota band led by Sitting Bull, who had fled to Canada following the Great Sioux War in 1876. The Nez Perce ware raged from June through October of that year, with Chief Joseph being the only major leader to survive. Joseph’s younger brother, Olikut, was the major force in leading the Nez Perce into battle, and Olikut helped them successfully outsmart the US Army on several occasions as the war ranged over more than 1,600 miles of Washington, Idaho, and Montana territory. Nevertheless, Chief Joseph was the one that the military leaders and American newspapers believed to be their principal military leader…mostly because he was the most prominent Nez Perce spokesman and diplomat.

They were wrong because Chief Joseph was no warrior. Rather, he opposed many of the subsequent actions of the Nez Perce war councils. By chance, Chief Joseph was the only major leader to survive the war, and it fell to 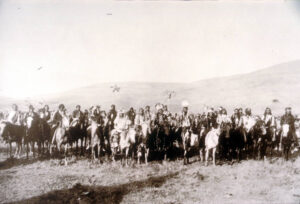 him to surrender the surviving Nez Perce forces to Colonel Nelson A Miles at the Bear Paw battlefield in northern Montana in October 1877. “From where the sun now stands,” he promised, “I will fight no more forever.” Chief Joseph lived out the rest of his life in peace, a popular romantic symbol of the noble “red men” who many Americans admired…now that they no longer posed any real threat, anyway. White settlers had described him as superhuman and a military genius…mainly because he was a diplomat and knew how to reason with people. On September 21, 1904, the Nez Perce leader Chief Joseph died on the Colville reservation in northern Washington at the age of 64.