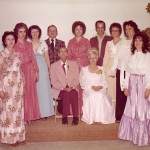 When my mother was young, she and her 8 brothers and sisters helped out with chores around the house. Dishes were a big undertaking with 11 people in the family, so every day, after supper, Grandma would wash the dishes, and the children would dry them and put them away.

Many times there would be a lot of conversation going on, but as with any group of kids, sometimes arguing seemed the order of the day. One day in particular, the arguing became rather heated, and Grandma had simply had enough of it, so she yelled over the arguing, “Alright, that is enough!! I don’t want to hear another peep out of you kids!!”

Well, my grandmother was a tiny little woman of only 5′, in her tall days, but one thing I can tell you from personal experience…you didn’t mess with Grandma! Sometimes small packages can carry a big boom! And that is exactly how it was with my grandma, so when she told her kids to knock it off, they knew that she meant business.

Still, in every crowd there is one person who figures that life is about taking chances. So, as all the children stood there working quietly, my Aunt Deloris, Aunt Dee as we called her, assessed the situation and made a decision. She quietly said, “Peep.” Well, you can imagine that the other children assumed that she was in BIG trouble, but Grandma, try as she might, couldn’t help herself. She burst out laughing. Of course, everyone else started laughing too, and the argument was over.

Nevertheless, Grandma had a dilemma, and I don’t know if it started as a result of that argument or not, but Grandma decided that a good way to stop an argument before it started…at least while doing the dishes, was to have a sing-along. She figured that singing children weren’t arguing children. Thus, was born what I will call the Dish-Along.