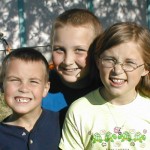 For most of their early years, Shai would have loved to give her brother back…or ship him off…or trade him in…whatever worked. Theirs was the type of relationship that gave the term “sibling rivalry” its meaning. Shai detested Caalab’s boyish pranks, and Caalab took that as the perfect reason to pick on his big sister. It made for some explosive situations at my daughter, Amy and her husband, Travis’ home. In fact, there were times that I wondered how Amy kept her sanity.

It wasn’t that Shai disliked all little boys, in fact, she loved spending time with her cousins, Chris and Josh. I guess the main problem was that Caalab like playing tricks on his sister and cousins, and it just didn’t go over very well…with any of them. I remember the fights that used to go on between the 4 of them, all too well. Sometimes, I felt like a referee when they were all at my house, and not their grandmother.

Worse yet, it always seemed like Caalab was the odd man out. The rest of the kids didn’t want him to play with them, most of the time. It was tough for me, as their grandma to have all this fighting and the 3 against 1 situations that we often had. Caalab got along well with Chris, and Shai got along well with Chris and Josh, but Caalab, Shai, and Josh were like oil and vinegar.

I always felt bad that Caalab was the odd man out. I would have felt bad no matter which grandchild it was. He had such a great sense of humor, but his joking often ended up looking like he was picking on the others…or picking a fight…and the biggest fights were between Shai and her little brother, Caalab.

A few years can make such a difference. A couple of years ago, I began to notice a moment or two when Shai and Caalab seemed to be able to sit together and laugh and talk. Sure, they were short lived moments at first, but they were moments, nevertheless. Now, Shai and her brother have achieved the impossible…or at least the impossible according to Shai. They seldom really fight anymore. Growing up some can make all the difference in the world.

Watching Shai and Caalab together now is a scene that warms my “grandmother’s heart”. These two kids…so different, and yet not really so different, interacting in brotherly/sisterly love is simply amazing, and I thank God for that change every day.