The great Comanche chief and war leader, Quanah Parker became a leader at a young age, and he was known for his bravery and his aggression as a warrior. I was drawn to this chief mostly because of his unusual name…both first and last. The first name was one I had never heard before, and the last seemed unusual for an Indian. Parker was born around 1848, near Wichita Falls, Texas, and died February 23, 1911, at Cache, near Fort Sill, Oklahoma. Quanah was the son of Chief Peta Nocona and Cynthia Ann Parker, a white woman captured by the Comanches as a child. Quanah is a Native American name that means “fragrant, or sweet smelling.” Quanah later added his mother’s surname to his given name. Their family was very happy until 1860, when the Texas Rangers attacked their encampment on the Pease River. While the stories of this event vary, there is no doubt that changed Quanah’s family forever, when the Rangers decided that Cynthia Ann and her young daughter, Prairie Flower should be returned to her people, even though that was against her wishes. It is believed that Quanah and Nocona were not there when the raid took place.

Quanah Parker was the last chief of the Kwahadi (Quahadi) band. He mounted an unsuccessful war against white expansion in northwestern Texas between 1874 and 1875. When that failed, he became the main spokesman and peacetime leader of the Native Americans in the region, a role which he performed for 30 years.

Quanah was a tall and muscular man, who became a full warrior at age 15. His reputation as an aggressive and fearless fighter was established after a series of successful raids. He became a war chief at a relatively young age as well, having gained the respect of his people. Quanah moved between several Comanche bands before joining the fierce Kwahadi, who were particularly bitter enemies of the hunter. The white Buffalo hunters had appropriated the best land on the Texas frontier and were decimating the buffalo herds. In order to stem the onslaught of Comanche attacks on settlers and travelers, the US government relegated the Indians to reservations in 1867. Quanah and his band refused to cooperate and continued their raids. Attempts by the US military to locate them were unsuccessful. In June 1874 Quanah and Isa-Tai, a medicine man who claimed to have a potion that would protect the Indians from bullets, gathered 250–700 warriors from among the Comanche, Cheyenne, and Kiowa and attacked about 30 white buffalo hunters quartered at Adobe Walls, Texas. The raid was a failure for the Kwahadi because a saloon owner had allegedly been warned of the attack, and the US military retaliated in force in what became known as the Red River Indian War. Quanah’s group held out on the Staked Plains for almost a year before he finally surrendered at Fort Sill.

Eventually Quanah agreed to settle on a reservation in southwestern Oklahoma, and he persuaded other Comanche bands to conform too. He soon became known as the principal chief of all Comanche. It was a position that had never existed before, and so was a great honor. As the chief of all Comanche, over the next three decades, he was the main interpreter of white civilization to his people, encouraging education and agriculture. He also tried to be an advocate on behalf of the Comanche, and soon became a successful businessman as well. Quanah also maintained elements of his own Indian culture, including polygamy, and he played a major role in creating a Peyote Religion that spread from 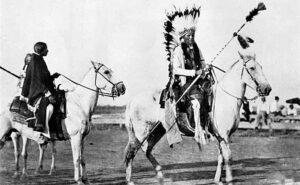 the Comanche to other tribes. He soon became a national figure, developing friendships with numerous notable men, including President Theodore Roosevelt, who invited Quanah to his inauguration in 1905. Roosevelt also visited Quanah at the chief’s home, a 10-room residence known as Star House, in Cache, Oklahoma.

Quanah passed away in 1911, and was buried next to his mother, whose assimilation back into white civilization had been very difficult. Her white family blocked her repeated attempts to rejoin the Comanche, and in 1864 Prairie Flower died. Cynthia Ann was miserable and reportedly starved herself to death in 1870.