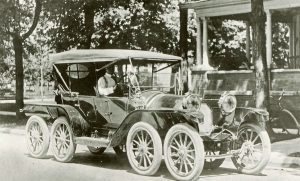 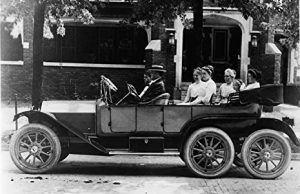 With the invention of the automobile, came the need to make improvements on things like speed, reliability, and looks. Most of the improvements that were made seemed to make sense and improved the automobile, but its been said that, “The line between visionary or eccentric, between progressive thinking, and outright insanity is often quite thin.” During the years when the American automobile industry was rapidly forming, the “unbridled manifestations of a creative imagination” blurred that line on thousands of occasions.

One such “blurring” involved the number of wheels on a automobile. Oddly, that is something that is still under debate today, with the dually pickup. I guess I can see how four wheels on the rear of a vehicle, set side by side, might give more traction, but some of the extra wheels designs of the vehicles in the past, simply made no sense to me. One of the more eccentric of those designs was the eight-wheeled Octoauto. It sported an astounding 180-inch wheelbase. Another example was the six-wheeled Sextoauto, devised by Milton O. Reeves. At the very least, these cars were goofy looking, and the designs seemed to have no exact reason or purpose for the placement of the wheels.

Another example, of the visionary side of the inventive line would be the optional swing away, electrically heated steering wheel available on the 1917 McFarlan. I guess I can see the value in that, especially on a cold winter day. There is nothing worse than toughing a freezing cold steering wheel, except maybe a burning hot one. Benjamin Briscoe of the Jackson, Michigan, based at Briscoe Motor Corporation, straddled the line quite nicely when he built the 1914 models. The 1914 models sported a single Cyclops headlight mounted dead center in the upper radiator shell and laminated paper-mâché body panels…that’s right, I said paper-mâché. The 1916 models sold with four cylinder engines and a promotion proclaiming, “Buy the Four. Use it a month. If then you decide you want the Eight, simply pay the difference and a small installation fee.” Sometimes, what appears to be eccentric today was innovative technology during the first decades of the industry. Promoted as, “The Friction Drive Car” was the 1907 Lambert, a vehicle that served to pioneer the type of transmission capitalized on with the patented developments of Byron Carter.

Between the creation of the first experimental models by William Lambert in 1891 and the companies’ closing in 1917, a wide array of “interesting” vehicles rolled from the companies manufacturing facilities in Anderson, 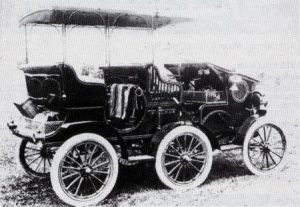 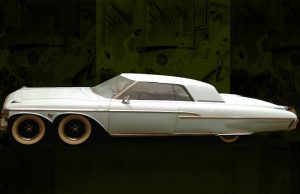 Indiana. They had engines mounted in the rear, the front, or middle, and came in two-cylinder and four-cylinder configuration, providing power to one or two wheels, dependent on if it were a three-wheel or four-wheel model. I’m sure that along the way there were a number of other interesting and even strange ideas concerning the automobile, but I guess that’s progress, and some of them weren’t progress at all, but a step backward. 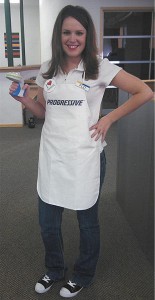 My niece, Kellie has always had a wonderful sense of humor. She has to be the giggliest person I have ever met. Anyone who is her friend, or who has worked with her can fully attest to that. Kellie likes to do things that make people laugh.

When I call my mother’s on Wednesdays to give her a pill reminder, Kellie usually answers the phone, as she and her mom, my sister Allyn, and Kellie’s sister, Jessi come to my mom’s for lunch on Wednesdays. She is always teasing me that I am interrupting her time, and I should just get off the phone!! She loves to joke around that way.

Kellie has always had a contagious laugh. All she had to do was laugh, and you could not resist joining right in. Even if you didn’t know what was so funny, you had to laugh, because she was laughing, and she made it seem like a laughing moment, so everyone had to laugh.

About a year ago, Kellie followed in the footsteps of her aunt, me and her cousin, my daughter, Amy, and became an insurance agent. The agency she works for dresses up for Halloween, so Kellie has come up with a couple of really good costumes, but this year’s really takes the cake. As an independent agent, Kellie writes for Progressive Insurance, so Kellie decided to go with the popular option, and dress up as Flo.

Of course, as we all know, there can be only one Flo, so I have looked her picture over very well, and I have determined that there must be two Flo-Bots. The first model looked a little too much like a robot, and so couldn’t really pass for the real Flo, but I think this second model has been highly upgraded to look like a pretty good Flo double. Not quite close enough to fool someone who knows Flo well, but as Flo would say, “She’s pretty good…She’s pr-ett-y good.”