A Price To Pay For Luck 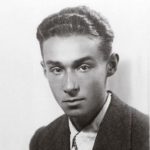 Primo Levi was an Italian Jew born on July 31, 1919 at Corso Re Umberto 75 in Turin, Italy, to Jewish parents Cesare and Esther “Rina” Levi. His father worked for the manufacturing firm Ganz and spent much of his time working abroad in Hungary, where Ganz was based. Levi’s mother was well educated, having attended the Istituto Maria Letizia. Rina and Cesare’s marriage was arranged by Rina’s father, Cesare Luzzati, who gave the young couple the apartment at Corso Re Umberto as a wedding gift. Primo Levi lived there for almost his entire life.

Primo Levi was an intelligent young man who excelled in school. In September 1930 he entered the Massimo d’Azeglio Royal Gymnasium a year ahead of normal entrance requirements. In class he was the youngest, the shortest and the most clever…he was also the only Jew. All this brought as its reward constant bullying. In August 1932, following two years at the Talmud Torah school in Turin, he sang in the local synagogue for his Bar Mitzvah. In 1933, he joined the Avanguardisti movement for young Fascists, as was expected of all young Italian schoolboys. He never wanted to be a soldier, so he avoided rifle drill by joining the ski division, and spent every Saturday during the season on the slopes above Turin. As a young boy Levi was plagued by illness, particularly chest infections, but he was keen to participate in physical activity. In his teens, Levi and a few friends would sneak into a disused sports stadium and conduct athletic competitions.

Levi later became a scientist, and it was this decision that would save his life during the Holocaust years…so to speak. When the deportations began, Levi found himself on a train to Auschwitz…the notorious death camp. The prisoners were put through a rigorous selection process. Those who didn’t make the cut, went directly to

Surviving the initial selection process at Auschwitz merely qualified a prisoner to be assigned to extremely harsh conditions involving back-breaking labor and intentionally miniscule amounts of nourishment. Levi was different. He was considered “useful” to the Nazis. His expertise as a scientist got him assigned in the camp laboratory. It also got him better food rations. Many would consider him lucky, but there was a price to pay for such luck. Levi was spared the horrific treatment his fellow prisoners were subjected to, but his protection from actually being subjected to such treatment did not save him from the horrors of witnessing such treatment. Levi tells the story of how prisoners at Auschwitz were treated in the books he has written on the subject. He tells of periodic selections, in which prisoners were forced to strip naked. These inspections were to “weed out” prisoners who were too exhausted or sick to provide meaningful labor. These prisoners were designated for transport to Auschwitz-Birkenau and the gas chamber. The prisoners who had been at Auschwitz…unlike newer prisoners, knew exactly what awaited them.

Levi’s description of this process from his work “The Drowned and the Saved” explains how most were already too mentally defeated and humiliated to resist: “The day in the [camp] was studded with innumerable harsh strippings – checking for lice, searching one’s clothes, examining for scabies and then the morning wash-up – as well as for the periodic selections, during which a ‘commission’ decided who was still fit for work and who, on the contrary, was marked for elimination. Now a naked and barefoot man feels that all his nerves and tendons are severed: He is helpless prey. Clothes, even the foul clothes distributed, even the crude clogs with their 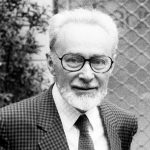 wooden soles, are a tenuous but indispensable defense. Anyone who does not have them no longer perceives himself as a human being but rather as a worm: naked, slow, ignoble, prone on the ground. He knows that he can be crushed at any moment.”

Levi survived his ordeal in Auschwitz, one of the few that did, but that did not ensure a quiet peaceful life for him. On April 11, 1987, Primo Levi died after a fall from a three-story building. His death was ruled a suicide, which would not be surprising with “survivor’s guilt” syndrome, but there are many who don’t believe that Levi would have committed suicide, and they think his death was an accident. I don’t suppose we will ever know, but I believe that whatever happened, Primo Levi is finally at peace.