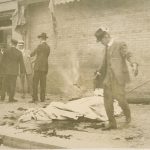 Most people would agree that the prospect of taking a nation into war is a scary one at best…especially for its citizens. In 1916, the world was in the middle of World War I. Isolationism had been the order of the day, as the United States tried to stay out of this war, but by the summer of 1916, with the Great War raging in Europe, and with the United States and other neutral ships threatened by German submarine aggression, it had become clear to many in the United States that their country could no longer stand on the sidelines. With that in mind, some of the leading business figures in San Francisco planned a parade in honor of American military preparedness. The day was dubbed Preparedness Day, and with the isolationist, anti-war, and anti-preparedness feeling that still ran high among a significant population of the city…and the country, not only among such radical organizations as International Workers of the World (the so-called “Wobblies”) but among mainstream labor leaders. These opponents of the Preparedness Day event undoubtedly shared the view voiced publicly by one critic, former U.S. Secretary of State William Jennings Bryan, who claimed that the organizers, San Francisco’s financiers and factory owners, were acting in pure self-interest, as they clearly stood to benefit from an increased production of munitions. At the same time, with the rise of Bolshevism and labor unrest, San Francisco’s business community was justifiably nervous. The Chamber of Commerce organized a Law and Order Committee, despite the diminishing influence and political clout of local labor organizations. Radical labor was a small but vociferous minority which few took seriously. Nevertheless, it became obvious that violence was imminent.

A radical pamphlet of mid-July read in part, “We are going to use a little direct action on the 22nd to show that militarism can’t be forced on us and our children without a violent protest.” It was in this environment that the Preparedness Parade found itself on July 22, 1916. In spite of that, the 3½ hour long procession of some 51,329 marchers, including 52 bands and 2,134 organizations, comprising military, civic, judicial, state and municipal divisions as well as newspaper, telephone, telegraph and streetcar unions, went ahead as planned. At 2:06pm, about a half hour after the parade began, a bomb concealed in a suitcase exploded on the west side of Steuart Street, just south of Market Street, near the Ferry Building. Ten bystanders were killed by the explosion, and 40 more were wounded, in what became the worst terrorist act in San Francisco history. The city and the nation were outraged, and they declared that justice would be served. 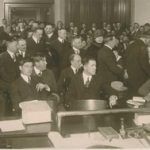 attack. In the trial that followed, the two men were convicted, despite widespread belief that they had been framed by the prosecution. Mooney was sentenced to death and Billings to life in prison. After evidence surfaced as to the corrupt nature of the prosecution, President Woodrow Wilson called on California Governor William Stephens to look further into the case. Two weeks before Mooney’s scheduled execution, Stephens commuted his sentence to life imprisonment, the same punishment Billings had received. Investigation into the case continued over the next two decades. By 1939, evidence of perjury and false testimony at the trial had so mounted that Governor Culbert Olson pardoned both men, and the true identity of the Preparedness Day bomber, or bombers, remains forever unknown.