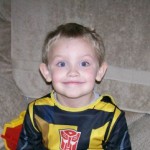 When you are the younger brother, life isn’t always easy. Your older brother gets to do all the really cool things, while you have to stay home, because you are too little. That’s how Easton used to feel…when he was younger. Easton’s big brother, Weston got to go to school, and even better, Weston got to go to their grandma’s house after school and spend several hours there. Going to Grandma’s house was the coolest place to go…and Weston was the only one who ever got to go and spend time there. It just wasn’t fair.

The really bad thing for Easton was that nobody seemed to understand how he felt, or even know that something was wrong. And worse, he didn’t know how to tell them. It was a dilemma. And since Weston was older than Easton by 4 years it was a dilemma that would be with him for quite a while. Easton realized early on that things were different for his older brother. Weston had a lot more rights and privileges. How could that be fair?

By the time Easton was old enough to understand that not all things are fair, and he was getting ripped off, this situation had gone on a while. Since Easton seemed too little to go the places and do the things his big brother was allowed to do, no one gave any thought to whether or not it was fair…it was simply the way it was. Easton wasn’t old enough. Unfortunately, as often happens with the younger sibling, the family thought of Easton as somehow younger than he really was. He was the baby, after all. It was just too soon for Easton to go to Grandma’s…or was it?

Finally, Easton had taken all of this situation that he could. It was time for him to take action. So, one day, he gathered up all the courage he had, and he told his mom and grandma that he would be a good boy, if he could go to grandma’s house too. The reaction to his little heart wrenching plea, was one of complete shock and surprise. No one had even considered that Easton was feeling that way. But, his courage paid off, because after that day, Easton got to go to his grandma’s house to play too. He was a big boy now!! The day had finally arrived!!

Today that sweet little boy turns 8 years old. No one thinks of him as a baby anymore, but a big boy who know how to be a good boy at his grandma’s house, and how to speak for himself…at least when it is really important. Happy birthday Easton!! We love you big boy!!