My uncle, Larry Byer was my mom, Collene Spencer’s older brother, and along with their younger brother, Wayne Byer, her best friends from her early childhood. They were the closest in age to her, and quickly became her usual playmates. Sometimes they got in trouble with their mom together, and other times her brothers were just sweet brothers who wanted to put a smile on their sister’s face. Mom always felt very blessed to be the sister in the middle of the brothers.

Uncle Larry was also a great blessing to his mom, Hattie Byer. When he had to move to Louisiana for work, he and Aunt Jeanette brought his mom

down for a visit, and showed her a wonderful time. It’s unlikely that Grandma would have traveled to Louisiana if he had not lived there, so the trip was a bit of a bonus for her. Uncle Larry was not born on Mother’s Day, but his birthday has fallen on Mother’s Day many times since then, and I’m sure that it always felt like a bit of an extra blessing for Grandma on the years that it did. 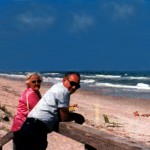 Uncle Larry always had a great sense of humor, and a sweet nature. I always loved his laugh and he could sure tell a good joke. For as long as I can remember, Uncle Larry and Aunt Jeanette had a place out in the country. They built houses for their kids out there too, and when they moved to Louisiana, the kids stayed on the land. I always expected that they would move back on the land when he retired, but they didn’t do that. They bought a little house in Glenrock, and it was there they he lived out his days, and there that Aunt Jeanette is still living now. Uncle Larry has been in Heaven now for about seven and a half years now, and we all miss him very much. Happy birthday in Heaven Uncle Larry. We love you. 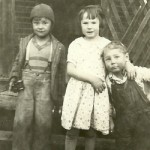 Since I wrote the story about bossy big sisters a while back, I have wondered about Bob’s great uncle, James Ernest Schulenberg. Jim was the youngest of Bob’s great grandfather, Max Heinrich Johann Carl Schulenberg’s ten children, and Bob’s grandfather, Andrew Carl Schulenberg was the oldest. Andy was born March 12, 1906, and Jim was born June 10, 1928. That put Bob’s dad, Walter Andrew Schulenberg’s sister Marion Claudine Schulenberg, born November 29, 1927, a little over 6 months older that her Uncle Jim. Nevertheless, the three were good friends, and played together often. After Andrew’s divorce from Vina Nona Leary Schulenberg, Walt and Marion’s mother, my guess is that the children didn’t see each other as much, with the possible exception of at school. Nevertheless, as we age, friends come I and out of our lives, and we maybe aren’t as close to our cousins, or in this case, an uncle, as used to be.

By the time Jim was grown, the Korean War was in full swing, and Jim took part in that war. I don’t know if he was drafted or if he enlisted, but I know he served, because of a story in the Billings Gazette saying that upon his return from the Korean War, he and his wife, whose name I don’t know yet, made their home in West Forsyth, Montana. That would put him right back in the town he and so many of the other, more recent, Schulenberg family members were born.

At some point around 1993, Jim moved to Billings, Montana, where he would spend the rest of his life. Jim passed away on June 24, 2006. When I first saw this picture, I had the opportunity to ask my father-in-law, who he was, but for some unknown reason, I did not ask him for very much information about his Uncle Jim. Now that he is gone, there is no longer an opportunity to ask him, and I really wish that was not the case. So often, we do not realize how much that past family history will mean to us, until we no longer have the opportunity to find out about it first hand. It is a live and learn situation, but I wish I had learned about it first, and not had to live with the regret that I didn’t ask. 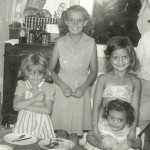 Susie is the first grandchild born to my mom’s parents, and her birth would announce a major change in the family. Born just 3 years after her youngest aunt, gave her access to instant playmates. There was no need for play dates with all the aunts and uncles she had to play with. She also had an abundance of babysitters, although as she got older, she might not have appreciated so many bosses in her life. Still, the playmates she gained from having the younger 3 aunts made life interesting. I’m quite sure their role in her life changed as time went on too. From being allowed to hold the baby, when she was really little to using the baby to play house, to having tea parties with their little friend. No matter what the game, the four of them played through the years.

Susie would not be the only grandchild for very long though. With the addition of her little brother, George, my grandparent’s second grandchild, just a little over a year after her own birth, Susie became a big sister, and before long would be the big sister to 4 siblings in all. Now her world was filled with lots of playmates and lots of fun. Being the big sister can have its advantages, in that you get to tell all the little ones what games you are going to play, because they don’t know all the cool games. Of course, that phase doesn’t last too awfully long before they want to start presenting ideas of their own. That can be a bummer if you are used to having the say in the matter, but Susie has always seemed to me like a person who gets along well with others. Of course, I can’t really speak to how she was as a little kid, because…well, I wasn’t born until she was 8 years old, and even then, she would be a teenager before I would know much about her temperament. I can say, however, that I have always felt like Susie was very easy to get along with, and I have enjoyed any time I spent with her, so I expect that she was the same as a kid.

One of the sweetest things that Susie has done, as far as I’m concerned is that she and her sister, Shelley hold occasional luncheons for my mom, aunts, and uncles. It is such a wonderful thing to do for them. They can all get together at Susie’s house, and they don’t have to cook or clean up after, but rather they can just enjoy the time they have to reminisce about the past, and talk about what their families are doing these days. 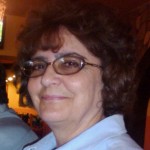 It means so much to all of them, especially since every year seems to find them smaller and smaller in number. Susie’s mom, my Aunt Evelyn, who is the oldest of my grandparent’s 9 children,  just turned 84, so time together is important. We just never know how many more years our aunts and uncles will have together.

Today is Susie’s birthday. I want to wish this sweet and special cousin of mine a very happy birthday. Susie, you are a wonderful person, and I hope you have a wonderful day. Thanks you for all you have done for my mom, and the aunts and uncles. Happy birthday, we all love you!! 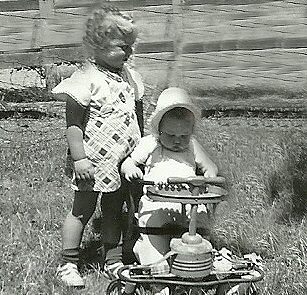 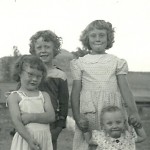 When children are born a number of years apart, the older children can end up having babies at almost the same time as their parents. Such was the case with my mother-in-law and her younger sisters. Her sister, Linda was born 15 years after she was, and Margee was born 18 years after she was. My mother-in-law married my father-in-law just 6 months later, and when their first child, Marlyce was born, Margee was just 1 1/2 years old. Marlyce was more like a little sister than a niece, and since she was so little, Margee didn’t know what a niece was anyway. All she saw was a new friend.

With each additional child, new playmates arrived, and before they knew it, there were 5 of them playimg together. By this time, of course, my mother-in-law’s sisters were old enough to know that the younger kids were nieces and nephew, and not friends. Still, the years spent playing with their nieces and nephew were years where friends were in abundance.

My mom’s family had much the same situation, except that it wasn’t the years between children that caused the closeness of the younger children to nieces and nephews, but rather the number of children in the family. My Aunt Sandy was just 3 years old when her sister, my Aunt Evelyn had her first child, Susie, and two more children would arrive by the time my Aunt Sandy was 5 years old. Aunt Sandy tells me that she never really felt like she was the youngest child, since there were so many nieces and nephews, and her sisters, my Aunt Bonnie and Aunt Dixie weren’t much older than Aunt Sandy, so they lived the story she did.

Having nieces and nephews that are very close in age to you can be a fun thing, because 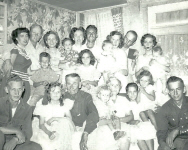 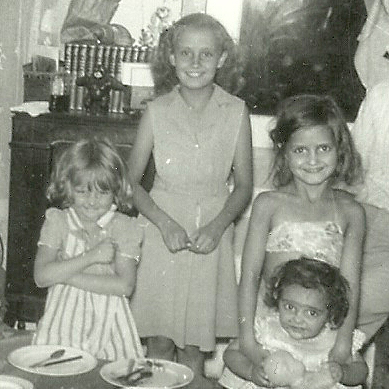 you always know you have friends to play with. I suppose it can be annoying too, because they can be just like a kid sister or brother…always under foot, so I’m sure there were times when the aunts just wished those kids would go home. They can also be great fun. They look up to you, which can be very different from what many kids experience. Either way, you will always have friends in abundance.