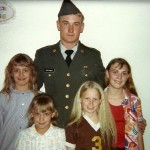 After his graduation from high school, my brother-in-law, Ron, decided to join the Army. His plan was pretty much to spend just the three years necessary to pay for his college education, but after he was honorably discharged and back home, the Persian Gulf War began in 1990, and he would be recalled into active service to fight over there for a time. It was a hard time for our family. The concern over his safety as a boots on the ground soldier, was very hard to take. You always hope you don’t have to send a loved one into war, but he served with honor and returned to us healthy and in one piece, so we were very thankful.

I remember when Ron was leaving, we had a get together to say good bye, and we took many pictures to keep him close to us in spirit, and tried to keep it light for Ron’s sake. One picture that I especially loved was of Ron with his 4 nieces…Uncle Ron’s Girls. He was not so many years older than my own daughters or nieces and nephew, that he totally felt like an uncle, but rather  like an older brother. We spent a lot of time out at their house when my girls, Corrie and Amy were little, so they were very close to their uncle, as were my nieces Machelle and Susan.

I suppose, that is why the girls all hated to see him leave so badly. They were, maybe, too young to fully grasp what it meant to be at war, but they understood what it meant to have their uncle move away. It was like tearing a part of their heart out. We all felt the same way, but everyone had to put on a brave face and a smile, because he had to go and there was nothing we could do to stop that.

It has been about 21 years since Ron first went away to war, and he is a successful mechanic, happily married to a wonderful girl, who we all love, with 3 children, a son-in-law, and a new grandson. We are very proud of his accomplishments and especially proud of his service to his country. As far as his “girls” are concerned…well, they still think the world of their uncle who still seems more like an older brother than an uncle, and they will always be Uncle Ron’s Girls.