Where is the Andrea Gail? 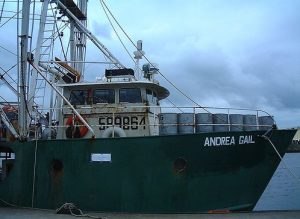 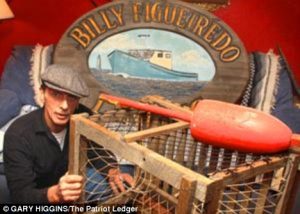 After the movie, The Perfect Storm came out, swordfishing boat, Andrea Gail became almost a household name. We could relate to the feelings of loss the families of those men felt, and found it hard to get past the idea of how those men died. Those things are a normal reaction to such a tragedy, but in the end, we expected they would find the swordfishing boat, and be able to bring closure to the families…allowing them to bury their dead. Sometimes, however, a lost ship takes a long time to find, and strangely, sometimes it is never found at all. Such was the case with the Andrea Gail. Her last coordinates had been called out on the emergency radio, but this was such a fierce storm, and the Andrea Gail was right in the middle of it, trying desperately to make it back home.

The name Perfect Storm depicted not just another storm or even just another hurricane…this storm was a monster. The 1991 Perfect Storm, also known as the The No-Name Storm, especially in the years immediately after it took place, and the Halloween Gale, was a nor’easter that absorbed Hurricane Grace and ultimately evolved back into a small unnamed hurricane late in its life cycle. The area of low pressure developed off Atlantic Canada on October 29. A ridge of high pressure to its north pushed it southward. Then, it reached its peak intensity as a large and powerful cyclone. The storm battered the east coast of the United States with high waves and coastal flooding before it turned southwest and weakened. Moving over warmer waters, it transitioned into a subtropical cyclone before becoming a tropical storm. It made a loop off the Mid-Atlantic states and turned toward the northeast. On November 1 the system evolved into a full-fledged hurricane with peak winds of 75 miles per hour, although the National Hurricane Center left it unnamed to avoid confusion amid media interest in the predecessor extratropical storm. It later received the name “the Perfect Storm” after a conversation between Boston National Weather Service forecaster Robert Case and author Sebastian Junger. The system was the fourth hurricane and final tropical cyclone in the 1991 Atlantic hurricane season. The tropical system weakened, striking Nova Scotia as a tropical storm before dissipating. There were thirteen confirmed deaths from the storm, including six on board Andrea Gail.

Everyone who saw the movie, now also knows about the Flemish Cap, which is an area of the Atlantic Ocean off the coast of Nova Scotia, and was where the Andrea Gail was when The Perfect Storm began its rampage. The Andrea Gail had sailed from Gloucester, Massachusetts on September 20, 1991, and after a minimal catch, sailed for the Flemish Cap. After encountering high seas in the middle of the storm, the vessel made its last radio contact late on October 28 about 180 miles northeast of Sable Island. After that, they tried to make a run for it through the storm, rather than lose their catch to spoil. The Andrea Gail sank while returning to Gloucester. Over the next few days, only three pieces of debris were found, and the Coast Guard said those could have washed off the boat in rough seas. To date, the boat, and her crew, David Sullivan, Robert Shatford, William Tyne, Dale Murphy, Michael Moran, and Alfred Pierre, have never been found.

However…on December 2, 2011 the Daily Mail Reporter printed this story…Lobster pot tag washes up 3,000 miles away across the Atlantic…two decades after being lost in Perfect Storm that inspired film. “A tag from a lobster pot lost two decades ago in what came to be known as ‘The Perfect Storm’ has washed up 3,000 miles away in Ireland. The pot that held the tag with Richard Figueiredo’s name on it was one of hundreds he lost when the storm struck off Cohasset, Massachusetts, in 1991. Rosemary Hill, of Waterville, County Kerry, found the tag on a beach last year. Last week she decided to try to contact Mr Figueiredo and found him through the Facebook account of his son Rich. Oceanographer Curt Ebbesmeyer told The Patriot Ledger newspaper that the tag’s 20-year drift is unusually long. Mr Ebbesmeyer, who studies flotsam and ocean currents, said the pot and tag may have been buried in offshore mud before drifting south off the U.S. Atlantic coast and then getting caught the in eastward Gulf Stream. He added that the tag then probably drifted south again into the circular Subtropical Gyre current in the mid-Atlantic, making six three-year loops before it again caught the Gulf Stream toward Ireland. Coast to coast: The tag would have made several loops as it drifted with a leading oceanographer saying it may have clocked up 50,000 miles. He believes in total it could have drifted 50,000 miles. Miss Hill, 39, loves beachcombing and said that this is the first time she’s ever traced a buoy or other piece of maritime flotsam to its owner. She told The Patriot Ledger she saw the orange tag amid clumps of seaweed on a stroll last year. She added it to other beach souvenirs and then forgot about it until last week. ‘I 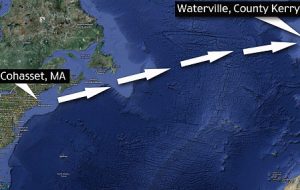 looked at it again and thought, “Why not try to find the owner?”‘ she said. ‘Nothing ventured, nothing gained.’ Mr Figueiredo and Miss Hill spoke last Thursday. She said she would mail the tag to him, but he wants her to keep it. He said: ‘The meaning it has over there is what matters. ‘I am honored that she has put so much enthusiasm into this. What’s happening now is a gift to me.'” I find that to be an absolutely amazing journey. 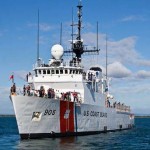 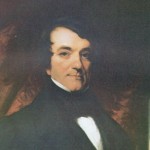 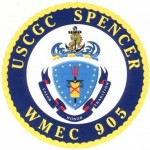 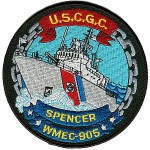