Every wedding anniversary is special, but the anniversaries wouldn’t even exist, were it not for the day to day living of the couple. Marriage is a lot of work, and when a couple marries young, it’s hard to say if they will have the wherewithal to make a go of it. My oldest daughter, Corrie Petersen was just two weeks past the age of 18 when she and her husband Kevin got married. Many people wouldn’t have give them ten cents for their chances of staying together, but they have proven people wrong time and time again. Now, a full 24 years into their marriage, they are like one unit. Of course, that is what God meant when he said in Mark 10:8, “And they two shall be one flesh: so then they are no more two, but one flesh.” That is how it is for Corrie and Kevin. They work so well as a team. Corrie and Kevin have gone through so many changes in their lives, and they have weathered each storm, to come out on the other side, stronger than ever. Oh, I don’t mean to say that there haven’t been some tough times, because every marriage has those times. It’s not the number of tough times a marriage goes through, but rather how a marriage comes through the tough times.

Part of what makes a great marriage, is when two people are going in the same direction, with the same goals. It’s not that they can never have differing ideas about things, but rather that they are able to see the other side of the coin, or the other person’s viewpoint. Corrie and Kevin do that quite well. They also support each other in every new venture they might take. I think most marriages find themselves with ever changing hobbies and such, and some can be time consuming. If the spouse is not supportive of the new hobby, there can be a few hard feelings. Over the years Corrie and Kevin have had a few side businesses, such as making cross necklaces, or stained glass, and Corrie was also a virtual assistant. Those things take time, and if you 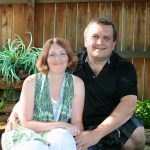 don’t have the support of your spouse, people can encounter problems. Sometimes, even if they are supportive, there can be time conflicts. There wasn’t for Corrie and Kevin, because they often worked together on these things. I’m sure that is not such a strange thing, but not every family has a good working relationship like that.

Corrie and Kevin are two very compatible people and while their marriage started out early in their lives, they are, and always have been very much in love. Theirs is a match made in Heaven and one that will last until death parts them…and I am very happy that they have each other. Today is Corrie and Kevin’s 24th wedding anniversary. Happy anniversary Corrie and Kevin!! We love you both very much!!