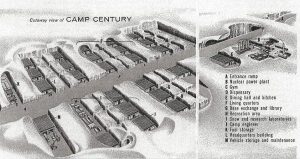 When I think about secrets, nothing very sinister comes to my mind, but when it comes to national or world secrets, maybe we should think a little differently. Of course, not every world or national secret is sinister, but some can be pretty odd. I don’t claim to be privy to any current national security secrets, but I’m finding out some from the past. There were some secrets that most people don’t know about, and some that almost seemed like science fiction. In 1959, the United States used to have a small underground city in the North Pole called Camp Century. It looked a lot like the rebel base on Hoth, which is the sixth planet in the remote system of the same name, and was the site of the Rebel Alliance’s Echo Base, as Star Wars fans would already know. Hoth is a world of snow and ice, surrounded by numerous moons, and home to deadly creatures like the Wampanoag…a cross between a polar bear and a Sasquatch, in looks anyway. Of course, that isn’t what Camp Century really was.

When Camp Century began its life, it was as a scientific outpost located hundreds of feet beneath a Greenland iceberg. From the surface, it looked like nothing more than an ominous snow-covered pyramid. But below, it was gigantic. The base was powered by an underground nuclear reactor, and at one point, is said to have housed a staff of 200. It was a self-contained city, complete with a gym, a chapel, a library, hobby shops and 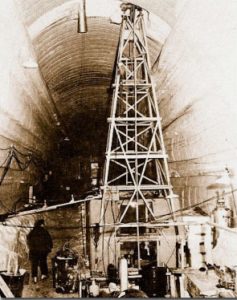 even a movie theater. I wonder what kinds of movies they watched…movies about the outside world, and in summer no doubt. The plan was for scientific experiments to be conducted there, but as sometimes happens, the military decided it could be better used as a base for their own experiments…namely blowing things up. I suppose they assumed that there was little chance of anyone getting hurt, because of the remoteness of the base. The best kept secrets exist here, and I don’t think I have a big problem with that. So, to recap: The United States had a 200-person nuclear-powered outpost located beneath the ice of the North Pole, where one of their primary objectives was to drill as deep into the unforgiving, ancient ice as possible. Now, that sounds scary.

The military took over in about 1960 and converted Camp Century into a giant ice-bound missile silo. Called Project Iceworm, the goal was to store approximately 600 nuclear missiles in the base, giving the United States a nice, secret little nuclear facility right next to Soviet Russia. Luckily for Russia, technical problems led to the whole mission being scrapped, because maintaining the tunnels was a constant chore. Every month, 120 tons of ice had to be removed to maintain the tunnels. The whole site collapsed within the that decade. Apparently, they worked harder at keeping the tunnels cleared, than at any experiment, or missile setup that they did.

The unites States Department of Defense told the Danish government that the “official purpose” of Camp Century was to test various construction techniques under Arctic conditions, explore practical problems with a semi-mobile nuclear reactor, as well as supporting scientific experiments on the 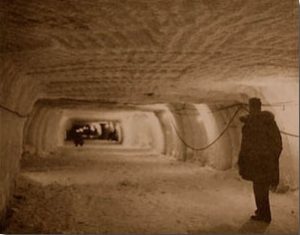 icecap. The process involved cutting a total of 21 trenches and covering them with arched roofs, within which prefabricated buildings were erected. With a total length of 1.9 mi, these tunnels contained a basically a small town, the total population of which was around 200. From 1960 until 1963 the electricity supply was provided by means of the world’s first mobile/portable nuclear reactor, designated PM-2A and designed by Alco for the United States Army. Water was supplied by melting glaciers and tested to determine whether germs such as the plague were present. Once it was cleared, they were able to use it. Nevertheless, fraught with trouble from the start, it proved a better idea to close it down.