The Sheriff In Town 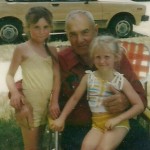 Everyone hopes that the marriages in their family will last forever, but sadly that is not always the way things work out. Bob’s grandparents on his dad’s side divorced when his dad was about 5, I believe and for many years, Bob’s dad would have nothing to do with his real dad. In fact, Bob would be a grown man with two daughters of his own before we would know anything more than that his grandpa was the sheriff of Forsyth, Montana for many years before he retired. The one thing we did know is that if your last name was Schulenberg in Forsyth, Montana, they knew who you were related to…the sheriff. He was a much loved sheriff for a long time.

The years had changed him from the man who could not seem to get along with grandma, to a much more mellow person…someone who maybe realized what he had missed out on through those many years of no contact. Bob and his family had visited Forsyth many times after moving to Wyoming, but the kids would not have known their grandpa if they saw him on the street…unless he was in uniform of course, but Bob doesn’t recall ever meeting him.

Grandpa would pass away before we got a chance to see him again, and much about him remains a mystery to us. We know that he remarried after the divorce, and had another son, who has stayed in contact with my father-in-law, and is a very nice man. We know that during his retirement years he made wooden lawn chairs, and he gave one to each of his great granddaughters. It will be the only thing they will have to remember him by…other than a couple of pictures. It is sad that so much of their heritage is lost to them, but that is the way it goes sometimes in a divorce. I will always be grateful that we had the chance to meet him, even if it was only once.