New York City…a place as glamorous as any city in the world, the financial center of the world…and a target. Most of us know about the attacks on the World Trade Center in 1993, and again on September 11, 2001, but there was another attack that was planned for New York City, and in the end…foiled. This attack is most likely one you don’t recall…in fact, I think very few people even knew about it. The United States has enemies, as most nations do, and one of the best know enemies of the United States was Adolf Hitler.

According to an article I read recently, two men. Laureano Clavero and Pere Cardona, interviewed a Nazi pilot from World War II, who passed away in 2013. According to their research and their interview, the two claimed that they had proven the planned attack was real in an interview as they promoted their new book, The Diary of Peter Brill, a Nazi pilot during World War Two. In the interview, Peter Brill, who has been dubbed The Last Luftwaffe Pilot, claimed that Hitler was developing a plan to send a huge bomber from Germany to the United States. The New York mission has long been considered a myth, but Clavero and Cardona insist Brill admitted his involvement when they interviewed him. They claimed that Brill was a part of the secret project. 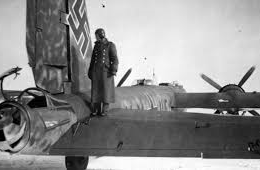 Clavero came across Brill and his history in 2010, when he was investigating the crash of two German bombers in the Pyrenees during the conflict. I’m always amazed at how often looking for one piece of information leads to another discovery. Brill agreed to give the authors an interview, and told them that he had been asked to take part in a secret mission to cross the Atlantic and launch the huge bombardment. While Brill was not specific, the two authors believe the project was convened in 1943, with Hitler’s enthusiastic support. The huge Heinkel plane was to be modified to allow it to fly 12,000 miles…the distance from Berlin to New York and back.

Brill and five others received top-secret training in the Polish city of Thorn, where they learned to fly at high altitude. They had to brave the frequent fires in the bomber’s engines. Before long, it became clear that the Heinkel was incapable of flying to New York and back. The authors claim that, when it became clear that the “Junker” could not fly such a long distance, the German engineers toyed with various workarounds, including 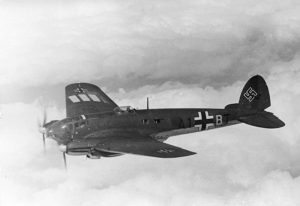 the creation of a halfway house and the coupling of the bomber to a Mescherschmitt. Nevertheless, it soon became clear to everyone that the mission would have to be scrapped, as there were more pressing difficulties taking precedence. “What is certain is that they were close to realizing their objective, but all the crazy dreams of Hitler were left to one side after the battle of Stalingrad,” Cardona said. “They were pushed aside for the day-to-day problems.” Clavero and Cardona have written their new book using the interviews given by Brill, and the memoirs gifted to them by his family when he died. The book sounds very interesting, and I, for one, plan to read about this…almost attack on New York City.

As I continue to read through my dad’s letters to his family during World War II, I have been reading between the lines, and behind the scenes that he was able to share. During a war, the soldiers involved are unable to speak about the operations they are taking part in. Still as young men and women, far away from home, they want and need to write and receive letters. They need the closeness of family, and yet they don’t want to worry their family, and they are bound by military rules, not to talk about the missions. So much so, that letters must be read to make sure no information accidentally gets out.

Knowing my dad in his later years, and getting to know him through his letters home, I know that he was not a man who wanted others, especially his family to worry about him. So, he never told of pain or fears. Which leads me to believe that my dad wouldn’t have told his family, and especially his mom, what he was feeling during the bombing missions he went on every day. Not even if he could have. That was just the man my dad was…as a young soldier, and as a adult husband and father.

Still, in reading his letters, the need for comfort and reassurance that existed in him every day, whispered quietly from between the lines and behind the words my dad wrote in his letters. He asked for good news concerning men he knew that were in the service too. Hoping that if they were ok, he would be too. Of course, I can’t be sure that those were my dad’s feelings or his thoughts, but I know that is how I felt when I looked at the pictures he took of flak from the German Fliegerabwehrkanone. This was an 88mm gun capable of rapid fire. The resulting shell fragments would rip through the planes and it is said that it took over 3,300 rounds to take down a plane. And those guns did take down planes. The B-17 bombers had to fly through these traps on the way to and from their targets. How could these boys go through that every day and not have fear that they would not come home. I know it took great faith in God to move beyond that fear…to keep going…to survive the

I have great respect for all of our soldiers, because they push their fears back every day, and hide their true feelings from their loved ones so they don’t worry. And yet, when I look at the pictures Dad took of the flak all around their plane, and read the letters telling his family that he is “ok and feeling fine”, which is really a way of saying he is still ok, and not telling them much of anything I think I understand what true bravery is. That was typically my dad, never allowing his feelings to worry his family. I feel that I know my dad better from his letters and it makes me appreciate what a wonderful man he was even more. I love you Daddy!!