loss of a child

When I first met the man who would become my niece, Jenny’s husband, he was 12 years old, and like most 12 year old boys…at that awkward place between a pesty kid and an obnoxious teenager, and through the years I hadn’t heard that he had changed much. Over the years that I had been around him, he was a mouthy teenager, and very much the smart aleck…but then what teenager isn’t…right.  So, when Jenny brought him to church the first time and I found out who she was dating, my first thought was, “Oh Jenny, not Steve!!” All I could think of is that my niece had no idea what he was really like.

What I found out was that Steve was different now. Jenny did marry Steve, and they have been married for almost 9 years, but a successful marriage is not dependent on one or both of its members being nice people. This marriage, however, is not one of those marriages that has lasted in spite of its members, because my sweet niece, Jenny, found herself a gem in Steve. As Steve grew into adulthood, something grew inside him…the capacity to love.

Steve is a giant of a man who could easily hurt anyone he chose to, but Steve is a big teddy bear. I know of very few men with the kind of heart Steve has. He does have such a great capacity to love, and anyone he loves is very blessed. Our family gained a wonderful member when Steve joined it. Rarely do you meet a man who is so able to express how he feels and who is so loving.

Steve and Jenny have been through some 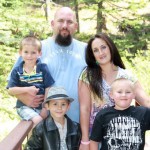 things in their marriage. Things no one should have to go through…the loss of a child, followed by the loss of a beloved pet. Yet, with broken hearts, they have held each other close, and loved each other…and survived. They will be ok, because they both have the capacity to love.

Today is Steve’s birthday, and I want to let him know what a blessing he has been to our family. He is a wonderful husband to Jenny, and father to his children, and all the other titles he holds in this family. He has touched all our lives, and we are blessed, because he grew into a different man. Happy birthday Steve!! It’s going to be a great year for you.