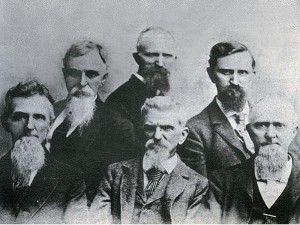 After seeing some old pictures of the Knox family a while back, I have wondered about one picture in particular. I’m never sure exactly why one picture stands out in my mind above all the others I have, but it does happen. This one is a picture of six Knox brothers, John, William, RM, Dr Nicholas, James, and SYT Knox. These men looked so strong and stern. I know that my husband, Bob’s Knox ancestors were both politicians and ministers, but that didn’t mean this picture had anything to do with either of those things. Then I came across a book about Hattie Goodman’s family history search, and found that these brothers were a missing link.

It seems that Bob’s 6th great grandparents John and Jean Gracy Knox, had seven children. They were Allison, John, Thomas, Delia, Mary, Squire, Joseph, and Benjamin. The only descendants that had been found belonged to John and Benjamin. I find it amazing that these family members didn’t know other family members within the family. I suppose that it is because of the fact that communications were no as easy in those days. Families lost touch, and the younger generations got to the point that they did not even know of the existence of great aunts and uncles that they had…especially if their parents and grandparents didn’t talk about them much.

That is probably one of the reasons people finally start looking for their ancestors. Pure curiosity. We know that family members are missing, and we want to know more about them. I think that is the reason most of us look for our ancestors. These brothers were at the Nashville Exposition in the summer of 1897, when they saw a copy of the Knox Tree, and realized that they belonged on it, since they were descendants of John and Jean Gracey Knox’s son, Joseph. They sent in not only their own names, but a number of others who also belonged on it, and ordered copies of the tree. It was at this point that the tree took on new life.

Whenever a new branch can be added to a family tree, it takes on new life. I have seen many parts of my own family history take on new life when, after months, or even years, of searching, someone connects something in their tree to something in someone else’s tree, and suddenly a link is formed. Of course, it is much easier to find those links these days, because of computers and the internet. I seriously doubt that I would be where I am in my family history were it not for those two tools. If people had to travel to all the different locations, or send out requests to all the different locations to get information, it would take forever to get anything accomplished. I’m glad the Knox brothers were at the Nashville Exhibition in 1897, because is made the process that much easier for everyone researching that line from that day forward, but it would have been a lot easier had computers been around. I suppose that I feel that way because of my own curiosity about my own missing links. I am quite impatient when it comes to that research. I want the information to be available, and when it is not, I am annoyed. Patience is a virtue, but I don’t want to have patience when I want information…do you?