The Deadliest War In American History 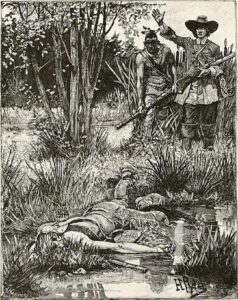 There have been many deadly wars in American history, but the deadliest war of them all took place during the 1670s. Technically, that was before the United States was even a nation. King Philip’s War, named for Metacom, the Wampanoag chief who adopted the name Philip because of the friendly relations between his father Massasoit and the Mayflower Pilgrims. The war pitted colonists and their indigenous allies (members of the Mohegan and Mohawk nations) in New England, against Philip’s (Metacom’s) Indigenous populations who didn’t want to be told what to do by the colonists in America. King Philip’s War was sometimes called the First Indian War, Metacom’s War, Metacomet’s War, Pometacomet’s Rebellion, or Metacom’s Rebellion. The conflict lasted from 1675 to 1678. The war continued in the most northern reaches of New England until the signing of the Treaty of Casco Bay on April 12, 1678.

Massasoit, Metacom’s father had maintained a long-standing alliance with the colonists…since the days of the Mayflower, when the Wampanoag Indians and the pilgrims helped each other survive that first awful winter. When Metacom (1638–1676), Massasoit’s younger son, became tribal chief in 1662 after Massasoit’s death, he forsook his father’s alliance between the Wampanoags and the colonists after repeated violations by the colonists. The colonists insisted that the 1671 peace agreement should include the surrender of Native guns. They felt threatened by armed Indians. Tensions increased when three Wampanoags were hanged in Plymouth Colony in 1675 for the murder of another 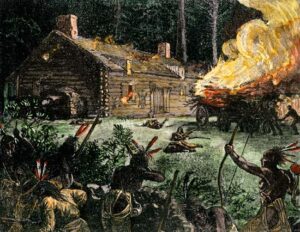 Wampanoag. Suddenly, native raiding parties were attacking homesteads and villages throughout Massachusetts, Rhode Island, Connecticut, and Maine. The attacks continued over the next six months, and the colonial militia retaliated. While the Narragansetts remained neutral, some of them participated in raids of colonial strongholds and militia, so colonial leaders claimed they were in violation of peace treaties.

The colonies assembled the largest army New England had mustered to that date, consisting of 1,000 militia and 150 Native allies. In November of 1675, Governor Josiah Winslow marshaled them to attack the Narragansetts. They attacked and burned Native villages throughout Rhode Island territory, culminating with the attack on the Narragansetts’ main fort in the Great Swamp Fight. It is estimated that 600 Narragansetts were killed, and their coalition was taken over by Narragansett sachem Canonchet. They pushed back the borders of the Massachusetts Bay, Plymouth, and Rhode Island colonies, burning towns as they went, including Providence in March 1676. The colonial militia fought back hard and soon overwhelmed the Native coalition. By the end of the war, the Wampanoags and their Narragansett allies were almost completely wiped out. On 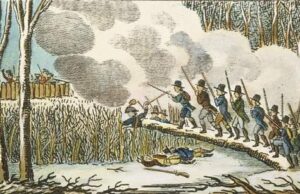 August 12, 1676, Metacom fled to Mount Hope, where he was killed by the militia. The war was the greatest tragedy in seventeenth-century New England. Many believe it was the deadliest war in Colonial American history. In the space of little more than a year, 12 of the region’s towns were destroyed and many more were damaged. The economy of Plymouth and Rhode Island Colonies was all but ruined. They lost over a tenth of all men available for military service. More than half of New England’s towns were attacked by Natives. Hundreds of Wampanoags and their allies were publicly executed or enslaved, and the Wampanoags were left effectively landless and destitute.