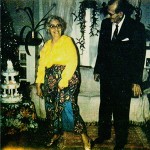 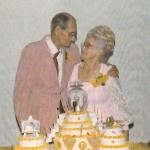 Those Happy Days Of Yesteryear

When I think of my grandparents now, I always think of their latter years. They seemed more serious during that time, and now that I have experienced aging parents and in-laws, I can understand how that can be. People get more tired as they age, and the aches ad pains that can come with it often makes them forget the days of youth and the stamina that went with it. I’m not saying that they never had any fun, it’s just that life was harder and since it was a lot more work, they just didn’t have the same stamina that I remembered from before. The nice thing about pictures is that they are a reminder of days from the past, and sometimes, they can take you by surprise, because they portray events or personalities from the past.

My grandfather was smitten by my grandmother from the day he first met her. He simply delighted in everything she did. And my grandmother was a bit of a teaser, so when she would get that urge to be a little goofy, he was always thrilled with the whole thing. They were both always happy people. They always reminded me of that old song, “Side By Side”. They were just traveling along singing a son, side by side. Circumstances didn’t really matter so much, because they always knew that tomorrow was another day and nothing was all that bad anyway. They had their family, their health, and the smiles on their faces, and everything was going to be just fine.

My grandparents survived the Great Depression years, and like many other people, money was scarce and families were big, but somehow they always found a way to have enough food on the table, a smile on their lips, and a song in their hearts. They helped their neighbors and even the strangers that always seemed to find their way to their table, hungry and in need of warmth. They never turned anyone away. I suppose that is why their always had enough. Somehow, God always finds a way for those who will give to those in need. He makes a way for them to always have enough, and that is what was

always the case for them.

My grandparents were married on Christmas Eve, so Christmas always a special time of year for them, filled with lots of celebration, and much gladness. As I said, my grandfather was smitten with my grandmother from day one, in fact you could say that he thought she hung the moon. He always got such a kick out of her antics, and when she decided to dance a little jig, he would look on with delight…unless he just decided to join right in. My grandparents have been living in Heaven for a long time, now, and I miss them very much, but when I see pictures like these, I find myself smiling at the memory of those happy days.