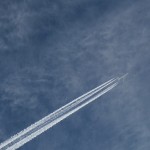 For a child, perception is everything. It isn’t necessarily how things really are, but rather how the child thinks things are. The other day, while Bob and I were out walking, we saw a jet fly over…not an unusual sight, by any means…but, on this occasion, Bob mentioned the contrails, and I was reminded of my perception of jets as a child. I have always loved watching jets or planes of any kind flying overhead, but of the jets, I had a different idea as a child. A different perception about what was happening in the skies above me. I thought the jets were scratching the sky. I suppose it sounds silly, now…as an adult, but then again, it isn’t such an odd idea really, and maybe in a way, they are. Still, it is not a commonly accepted, and certainly not scientific cause of contrails.

The mind of a child works differently than that of an adult. They might hear a song, such as 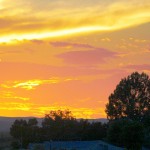 our national anthem, and wonder to themselves, or even ask their parents, what a Dawnserly Light is. That could be because they don’t often hear the word dawn, or because the song tends to run the two words together, making them sound like one, or maybe the child just thinks this is some new word they have not heard before, and they want to know about this obviously special kind of light that everyone sings about all the time. It must be special, if it is in a song. Their minds imagine a light so beautiful that is has been given this special name…Dawnserly!! And when you think about it, the sunrise is really quite spectacular, whether it is Dawnserly or just the early light of dawn, but a child’s perception of it makes it into something so much more beautiful, that you start to think that maybe  it does  need a  special name, and  what better  name  for it  than Dawnserly  anyway.

One of the funniest childlike perceptions is the one most of us will hear at some point in our lives…you know the one…that 30 is old. Age looks so different to a child. I suppose that it has to do with the fact that they feel like their own lives are moving so slowly that they will never be thirty…therefore, 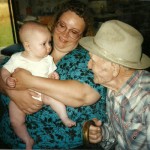 thirty must be an old age…right? They see a thirty year old as if they are the same age as an eighty year old. Many of us have laughed that off, chalking it up to the fact that they are kids, and they soon will learn. Yes, they will learn, but only when they lose that childlike perception of things. It is a time that will come to pass in each person’s life, but sometimes I find that a bit sad, because in reality, what is wrong with seeing things differently from what others see. Maybe those kids will eventually look back and know how silly it was to think that thirty is old, but even adults can see pictures in the clouds, so, I don’t think it’s such a huge stretch to envision a jet scratching the sky.