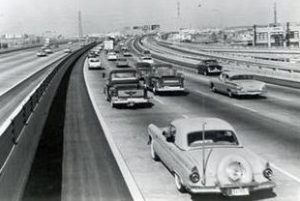 Prior to 1956, the road and highway system in the United States, well…lets just say, it left something to be desired…like passable roads for instance. Yes, there were a few highways, but on June 29, 1956, President Dwight Eisenhower signed the Federal-Aid Highway Act of 1956. This bill changed the highways by creating a 41,000-mile “National System of Interstate and Defense Highways” that would, according to Eisenhower, eliminate unsafe roads, inefficient routes, traffic jams and all of the other things that got in the way of “speedy, safe transcontinental travel.” At the same time, highway advocates argued, “in case of atomic attack on our key cities, the road net [would] permit quick evacuation of target areas.” The 1956 law, which allocated more than $30 billion for the construction, declared that the construction of an elaborate expressway system was “essential to the national interest.” The plan included a lot of discussion on things like where exactly the highways should be built, and how much of the cost should be carried by the federal government versus the individual states. Several competing bills went through Congress before 1956, like the ones spearheaded by the retired general and engineer Lucius D Clay, Senator Albert Gore Sr, and Representative George H Fallon, who called his program the “National System of Interstate and Defense Highways,” thereby linking the nationwide construction of highways with the preservation of a strong national defense.

For President Eisenhower, however, who had participated in the United States Army’s first transcontinental motor convoy in 1919, during World War II, there was a realization that the country needed a better highway system. He had seen Germany’s Autobahn network, and admired the efficiency of it. In January 1956, Eisenhower repeated his 1954 State of the Union address call for a “modern, interstate highway system.” Later that month, Fallon introduced a revised version of his bill as the Federal Highway Act of 1956. It provided for a 41,000 mile national system of interstate and defense highways to be built over 13 years, with the federal government paying for 90 percent, or $24.8 billion. To raise funds for the project, Congress increased the gas tax from two to three cents per gallon and impose a series of other highway user tax changes. On June 26, 1956, the Senate approved the final version of the bill by a vote of 89 to 1. Senator Russell Long, who opposed the gas tax increase, cast the single “no” vote. That same day, the House approved the bill by a voice vote, and three days later, Eisenhower signed it into law.

The highway construction began almost immediately. With the construction came the employment of tens of thousands of workers and the use of billions of tons of gravel and asphalt. The system fueled a surge in the interstate trucking industry. That was good, but soon it pushed aside the railroads to gain the lion’s share of the domestic shipping market. Interstate highway construction also fostered the growth of roadside businesses such as restaurants, most of which were fast-food chains, hotels and amusement parks. By the 1960s, an estimated one in seven Americans was employed directly or indirectly by the automobile industry. Not only 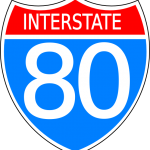 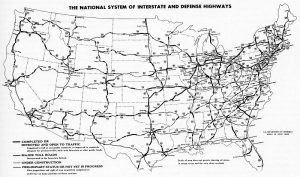 that, but America had become a nation of drivers. Legislation has extended the Interstate Highway Revenue Act three times. Many historians say it is Eisenhower’s greatest domestic achievement. Many called the years between 1956 and 1966 “the Greatest Decade.” Still, critics of the system have pointed to its less positive effects, including the loss of productive farmland and the demise of small businesses and towns in more isolated parts of the country. I suppose that’s true, but it was inevitable.