When my nephew, Barry was little, he spent a lot of time with his grandparents, my in-laws, while his mom, my sister-in-law, Jennifer worked. Like most little boys, Barry had at least one hero. Often a boys hero is a television character, and that may have been the case for Barry, but his real hero was his grandpa. He wanted to be just like him. In fact, he told us once that he didn’t need to go to school, because he was going to “stay home and work” with Grandpa.

Oh, and work he did. From the time he was a little boy, he wanted to be on the tractor, or using his wagon to help Grandpa haul in wood for the fire. Anything his grandpa was doing was simply ok in his book. Barry helped him with snow, wood, cars, cows, just about everything. His grandpa was his best buddy and hero. Yes, Barry wanted to be just like Grandpa, and oddly, he got his way in more ways than just work and other activities. It amazes me just how much Barry looks like his grandpa. Looking back at old pictures of my father-in-law and comparing them to my nephew, they could almost be the same person.

Pretty much every boy, and child for that matter, has a hero or two in their lives, and if you ask me, Barry could have chosen a far worse role model than my father-in-law, who is a hard working and very caring man. In many ways, Barry’s life has been modeled after his grandpa’s. Barry works hard and holds himself to high standards. He is a man that can be counted on whenever you need him. And to this day he would do just about anything for his grandpa. It’s is sort of like 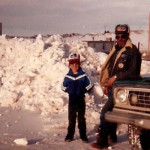 Barry has turned into a good man, and it has been a pleasure watching him grow up. He could have chosen to be wild and crazy and to mess up his life, but he chose to model himself after a good man, and become one himself. As his aunt, that makes me very proud and grateful to my nephew. Thanks for all you do Barry!!