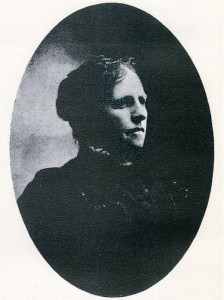 When Hattie Goodman, who is my husband, Bob’s 3rd cousin 4 times removed, wrote her family history book about the Knox family, back in 1905, computers and the internet were far in the future. The Knox family knew that their roots were is Scotland, but during her lifetime, the connection was never made. Having searched, fruitlessly at times, for my own roots, I can relate to the frustration she must have felt at hitting that brick wall. I can’t imagine how slow the process must have been when the only ways to search the records were by mail or a personal visit to the city whose records you were researching…or word of mouth, which can be highly unreliable. Her own search ended with her passing, but since that time, much has changed in the genealogy realm.

While she was unable to link the Knox family to Scotland, that link has since been made. According to John Knox, of the Knox-Laffoon clan, “John Knox, emigrant progenitor, represented by the trunk of our Knox Family Tree, was a native of Scotland, born about the year 1708. The exact locality of his birthplace is not certainly known. Some of the descendants on two different branches have it by tradition that Renfrewshire was his native place. He went from Scotland to Ireland, with other Scotch emigrants, by invitation of the King of England, to constitute a balance of power against the insurgent Irish Catholics. He married an Irish Presbyterian wife, Miss Jean Gracy, whose mother’s name was Jean Sinclair. They emigrated to America (from Coleraine, Ireland) about 1740, in company with his brother-in-law, Patrick Gracy, and others. It is thought that he first settled in Pennsylvania before coming South to Carolina. He was one of the early settlers of Rowan county, N. C. He bought six hundred acres of land on the south side of Third Creek for £37, 10s., which land had been granted by Earl Gran­ville to James Stuart.”

At some point, my father-in-law, Walter Schulenberg, who had married my mother-in-law, Joann Knox, was given a CD containing much of the history of the Knox family, in the form of Hattie Goodman’s book and many family pictures. I downloaded that to my computer, and have since very much enjoyed reading her writings, and especially enjoyed all the pictures that were included. I have used several of them in previous writings about the Knox family. What a wonderful thing for someone to have transferred all that information to a CD, where it could be shared and enjoyed by so many people. Originally, Reverend James Knox drew a sketch of his family tree, as far back as he knew. During Hattie’s lifetime, she was able to add many people to the original tree, and in the end produced a wonderful heirloom tree with about 2,200 names on it. Many copies were made and given to various family members. I was privileged enough to be able to see one of those copies when Bob and I visited 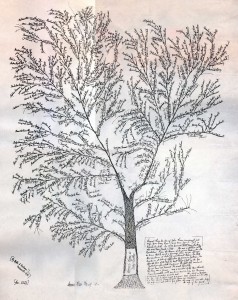 his great grandparents, Edgar and Nellie Knox in September of 1976. It was a magnificent tree, and while I can provide a copy here, it could never be as impressive as the extra large one I got to see.

I suppose that many people might think that today’s ability to research family histories is almost cheating, but I think it is better to be able to find the answers…even if it’s taking the easy way, than never to find the answers at all. These days, the research has gone far beyond pouring over records stored in some dark basement room at city hall. Besides the internet, and the vast amount of records that are shared there every day, there are also DNA connections. I have had my DNA analyzed, and have connected with many family members from that one test. It is amazing how far we have come, and I think that in the future, we may find ourselves even closer to being able to connect to our roots, be they Scottish or one of the many other nationalities.