Footprints In The Snow Drift

My husband, Bob has a habit of sweeping the snow into a pile in the street in front of where we park our cars. It is a really nice thing to do, because it means I don’t have to wade through the snow to get into the house. It also creates a large pile of snow beside the curb in front of our cars…especially when it snows a lot.

My grandkids have been known to get silly around snow drifts…natural or man made. Throwing each other in the snow, or throwing themselves in, are common occurrences. But then these things are not unusual for kids and snow. And of course, the kids aren’t the only ones involved in the snow day fun. Their dads love to be the ones to throw those kids in the snow…and the funny thing is that the kids are begging their dads to throw them in the snow drift. 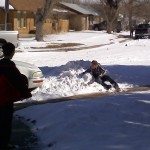 The other day as Bob and I were going out to our car, he pointed to the pile of snow and said that some kids had walked right through the middle of it. He seemed irritated about it, but it struck me as something totally different. Why is it that kids will leave a completely clear sidewalk to go traipsing through the snow? It doesn’t matter that they don’t have snow boots on, they do it anyway. There is just something about that pile of snow sitting there that calls out to them, just like rain water running down the gutter…they can’t resist.

As we got in our car, and started to drive away, I could picture several little kids walking along, and then they see the pile of snow. With one accord, the kids head for the pile of snow. Maybe they just want to be king of the hill. Or maybe they wanted to see if they would sink. I could see me as a little kid doing the exact same thing. I didn’t care, back then, if my clothes were soaked from 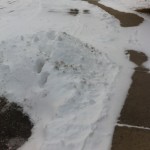 playing in the snow. Clothes will dry, after all, and what kid worries about catching a cold, or dripping on their mother’s carpet. Those are matters to be worried about after they happen. Mom loves you anyway, and she will only be mad for a while, and catching a cold meant that you got to stay home from school…a prospect that almost made being sick worth it…provided you didn’t feel too ill to enjoy the stolen day off, and that it didn’t drag into the weekend.

Yep, there is just something about a pile of snow, natural or man made that calls out to you. “Come and play. That’s why I’m here, you know.” What kid can resist?