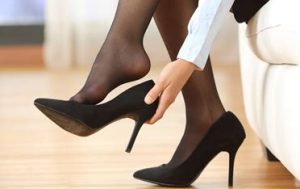 This year marks the 82nd anniversary of the invention of nylon. For most of us, this invention was life-changing, whether we realize it or not. This invention was more than just the stockings or pantyhose that most of us think about, because nylon is in much more than that. It is used to make toothbrushes, umbrellas, hair brushes, fishing line, windbreakers, camping tents, winter gloves, kites, dog leashes, dog collars, guitar strings, guitar picks, children’s toys, racket strings, and medical implants, just to name a few of the nearly innumerable things made from nylon. People have Wallace Carothers and his team at DuPont to thank for it.

The inspiration for nylon really came during the Great Depression. Women have always loved soft stockings, and at that time, silk was very expensive, and most women couldn’t afford them. So, by the mid-30s, several DuPont Chemicals scientists led by Wallace Carothers were secretly working on a prototype polymer known then as “fiber 6-6,” which is another name for nylon.

Though nylon was first synthesized in a DuPont Chemicals laboratory on February 28, 1935, it didn’t become available to the public until 1940. When it did, it was in the form of stockings, and women across the United States flocked to department stores to get their hands on a pair. While silk probably felt more luxurious, the cost of it made it impossible to get, so nylon stockings became a great alternative, and when I think about my Aunt Gladys silk stockings, and how as little girls, my sisters and I couldn’t resist the feel of them. All Aunt Gladys ever said was to be careful not to snag them. I think that most people would be seriously worried about them, simply because of the cost. I often wonder if she was secretly cringing over the whole situation.

Dupont thought about going into other lines of products, but with the money they were making on the women’s 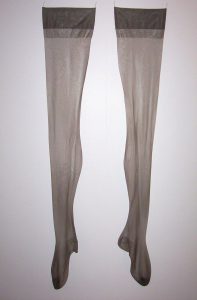 stockings bringing in in $9 million for DuPont in 1940, or $150 million in today’s dollars. They were pretty much the exclusive line at that time. Nevertheless, despite its wildly successful first year, DuPont shifted nearly all of its nylon production from the consumer market to the military in 1941 as the United States entered World War II. Allied forces used the material for everything from parachutes to mosquito nets.

By then, fashion trends had already spurred such high demand for the stockings that when consumers couldn’t get their hands on them, a sort of black market emerged. Some women even resorted to painting their legs in an effort to capture the look. When the war ended and production returned to pre-war levels, women rushed to department stores. They waited in lines that made early day Black Friday lines seem small by comparison, and sometimes even resulted in violent chaos. The phenomenon came to be known as the nylon riots. One of the most notable examples occurred in Pittsburgh in 1945, where 40,000 women lined up to try to snag a pair of nylons.