We All Need Jesus 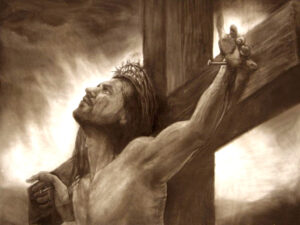 In a time of world chaos, one thing stands out…Jesus. We all need Jesus. It’s hard to believe that a sinless man would be willing to carry the sins of the world. None of us could or would do that. We would most likely fear death too much…at least at such a young age. It is believed that Jesus was about 33 years old. Most of us would feel like we had too much to live for at that age, and yet, Jesus endured the scourging, the “trial” that was nothing more than a lynch mob, and the horrible suffocating death on the cross, because He saw joy set before Him…JOY, how could that be? How could Jesus see the torture and death that was coming to Him as joy, because mankind could still come to Heaven…that was His joy.

He saw the joy of a world that could be back in right standing with God. Something we could never have achieved on our own. This world was in a seriously horrible place…even more so than the chaos we are in right now. The wages of sin is death, and we had all sinned. It was going to take the death of a man to pay for the sins of the world, but that man had to be sin-free. In the beginning, a sinless man sinned, thereby giving away his birthright of eternal life. So that meant either all mankind had to die and go to Hell, or a sinless man had to die to pay the price for all of us. Enter Jesus, and thank God He was willing to pay that price for us.

That was what Jesus did for us when He went to the cross on Good Friday. I don’t know if many of you really know what scourging is, but let me tell you. The Romans were famous for their horrific types of torture. The “whip” they used to beat (scourge) Jesus usually had nails or pieces of metal or glass attached to them. The purpose of these things being attached to the whips tails was to rip the flesh off of the victim. By the time they were done, internal organs were often visible. Then they took Jesus, after making Him carry His own cross, and nailed Him to that cross. The way they nailed Him to the cross meant that He had to push up with His feet to be able to get air into His lungs. The more tired the victim became, the less they would be able to raise themselves up so they could breathe. It was a matter of slow suffocation. That was what Jesus endured to give us the opportunity to have eternal life again. Nevertheless, it was and is still our choice. I just can’t imagine how anyone could choose not to receive that totally free gift of God. I know I will not refuse that gift. 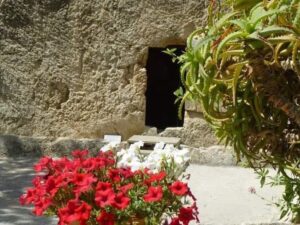 After being in the grave for three days, Jesus arose from the dead triumphant with the victory, and the keys to the kingdom, which He gave back to us. We can have it all…because He lives. He is risen!! He is alive!! And because Jesus lives, I can face tomorrow, no matter how ugly this world looks today. Victory is mine!! Heaven belongs to me!! I am free, because Jesus paid the price for me…and for you too…should you choose to receive. Praise God…Jesus is risen!! Happy Resurrection Day everyone!!