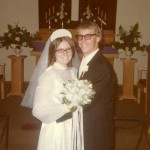 I met Bob while I was a senior in high school, and we were married a little over a year after graduation. After the wedding, we took honeymoon trip to Estes Park and the Rocky Mountain National Park. Bob and I had a wonderful honeymoon, and while we were gone, my parents took care of our cat.

When we came home, we opened the front door to find that a few things had changed around our house. Our first clue was when we turned on the light and there was something on the switch…shaving cream. Stepping into the living room, we saw that there were torn newspapers all over the floor…and our cat had been having a great time shredding them. So we cleaned things up, laughing about the trick my parents had pulled off. Both our families are teasers and pranksters, so this was nothing new to us.

Then, I started to make dinner. We were going to have fried chicken…one of my favorite dishes, and as it cooked it smelled wonderful. As I was preparing the side dishes, a found that we had another surprise in store for us. All of the labels on our canned goods had been removed, so the side dishes were going to be a bit of a surprise too. In the end, we had fried chicken with mashed potatoes and gravy, and peaches. Now that doesn’t sound too bad, until you add that fact that I like salt, so I used a generous amount on the chicken, and as we bit into it, we discovered that the salt and sugar had been switched. Bob was such a good sport. He told me it wasn’t so bad, and ate at least two pieces of chicken. Thankfully we had used a packaged gravy, so it was good…of course the potatoes were a little sweet. All in all, it wasn’t too bad, and nothing went to waste. Again, we laughed about the whole thing.

The final prank was discovered when we went to bed that night. There was a cup of rice over our door, so my parents got to throw the final handful of rice to commemorate our marriage. They had also short sheeted the bed…which I’m sure you can figure out, and there were a few crackers in there that needed to be vacuumed out, but the funniest thing was the fact that there were a selection of bells, including a cow bell tied to the bed springs…so I’m sure you get the picture on that one. We were too tired to remove those until the next day, so it wasn’t a quiet night, but we did get…some sleep.

I suppose some people might think our homecoming was a mean trick, but we thought it was totally funny, and it has been a funny memory that we have had for the last 36 years. I wonder how many other people can tell you all of the details of that first day home from their honeymoon.