The Element Of Surprise 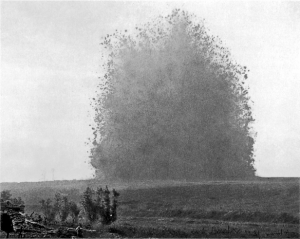 The manner in which battles are fought and won, never ceases to amaze me. In 1916, British forces began planning the Battle of Messines Ridge. For 18 months, soldiers worked to place nearly 1 million pounds of explosives in tunnels under the German positions. The tunnels extended to some 2,000 feet in length, and some were as much as 100 feet below the surface of the ridge, where the Germans had long since been entrenched. The Germans had no idea that they were there, and no idea what was going to happen. I find myself in complete amazement, that all those soldiers were working a mere 100 feet below ground, and the German soldiers above them had no idea. It was the element of surprise that was the whole key to this successful attack. 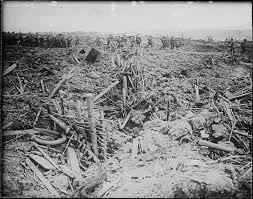 At 3:10am on June 7, 1917, a series of simultaneous explosions rocked the area. The explosions were heard as far away as London. A German observer described the explosions saying, “nineteen gigantic roses with carmine petals, or enormous mushrooms, rose up slowly and majestically out of the ground and then split into pieces with a mighty roar, sending up multi-colored columns of flame mixed with a mass of earth and splinters high in the sky.” While Messines Ridge itself was considered a relatively limited victory, it had a considerable effect. German losses that day included more than 10,000 men who died instantly, along with some 7,000 prisoners…men who were too stunned and disoriented by the explosions to resist the infantry assault. 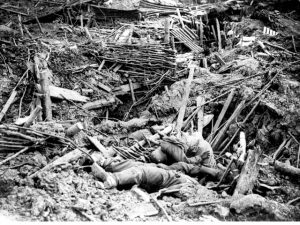 It was a crushing victory over the Germans. The German army was forced to retreat to the east. This retreat and the sacrifice that it entailed marked the beginning of their gradual, but continuous loss of territory along the Western Front. It also secured the right flank of the British army’s push towards the much-contested Ypres region, which was the eventual objective of the planned attack. Over the next month and a half, British forces continued to push the Germans back toward the high ridge at Passchendaele. Then on July 31 the British army launched it’s offensive, known as the Battle of Passchendaele or the Third Battle of Ypres.