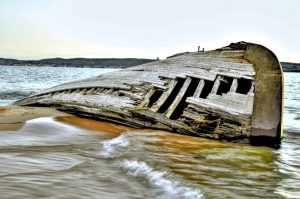 When a lake, or group of lakes, are almost the size of a small sea, with all the storm possibilities that go with a body of water the size of the sea, shipwrecks and other disasters on the water are bound to occur. There is a stretch of land along the Michigan coast, known to many as the Shipwreck Coast or the Graveyard of the Great Lakes. It is an 80 mile stretch between Grand Island and Whitefish Point, and the vicious waters have sunk hundreds of ships. Edmund Fitzgerald, Cyprus, and Vienna are just a few of the vessels lost beneath the waves, where they took their crew to a watery grave…their names forever etched in maritime lore. Their wreckages lie in varying depths of Lake Superior, the largest of the Great Lakes. 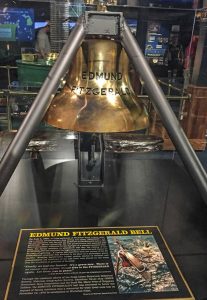 My husband, Bob and I came up for a visit in 1975, and my Uncle Bill Spencer, the original family historian, told us about the shipwrecks of Lake Superior, and how there were many that could be seen pretty clearly when flying over the lake. I wished we could have taken such a flight, and seen those ships for myself. My thoughts drifted to the time of the wrecks, and how the accident happened and about the people who lost their lives there.

Lake Superior was known for its big storms, and when the November gales came it was treacherous, especially along the Shipwreck Coast. “This part of Lake Superior is particularly treacherous thanks to a unique combination of geography and storm patterns,” Bruce Lynn, executive director of the Great Lakes Shipwreck Museum in Paradise, Michigan says. “Storms build up over Canada and the Great Plains. Their strong winds blow uninterrupted over 200 miles of open waters, building up enormous waves that drive ships into the coast or break them in half.” Fog, snow squalls, smoke from forest fires, traffic jams on the busy waters and human error add to sailing hazards. 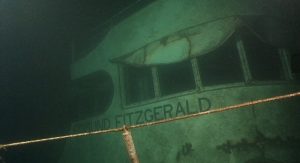 One massive ore carrier, the Edmund Fitzgerald was the largest to sail Lake Superior, nevertheless, it was a gale or a rogue wave that caused its sinking, but what it was is debated to this day. Gordon Lightfoot immortalized the tragedy in his song “The Wreck of the Edmund Fitzgerald.” The Fitzgerald’s 200 pound bronze bell was salvaged from the bottom of the lake later on, and and restored. The men were never recovered, because as most people know, Lake Superior never gives up her dead. The ship darted out on November 7, 1975, hoping to make Whitefish Point, but that was not to be. I think that just the questions behind the shipwrecks on Lake Superior makes the thousands of shipwrecks a huge mystery. 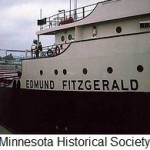