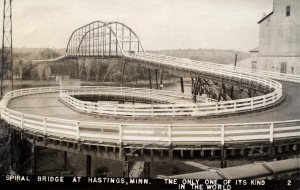 I never knew my dad to be a big sentimental saver, who kept every little knick knack or scrap of paper, so when he saved something, I have to think that it meant something, or was something special to him. Pictures were the exception, of course, but I was surprised when I found a couple of post cards from his sister, my Aunt Ruth when she was on a trip in 1946. She doesn’t say who she was with, but since she was married at the time, I have to assume that she was with my Uncle Jim. One post card, in particular, stood out for me, mostly I suppose because I like things of historic value. The post card was of the Spiral Bridge in Hastings, Minnesota. Hastings is in southern Minnesota, and while I would have a hard time believing that my dad never made the trip down to see this famous wagon bridge, I have no real proof that he was ever there, but I believe Aunt Ruth went over it on the trip back in May of 1946. Still, whether Dad went over it or not, he must have thought it quite interesting, because he kept the card the rest of his life. Dad was always interested in the historic value of things too, and I’m sure that is where my interest in those things began. He took the time to show us many historic markers and places of interest. 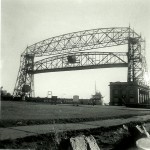 The Spiral Bridge was built over the Mississippi River in 1895 as a wagon bridge. It was built with a large spiral ramp on the south end to allow enough clearance for the river traffic to pass below the bridge. These days we would have a vertical lift bridge, such as the one at Duluth Harbor, or a draw bridge, like the Tower Bridge, but back then, they didn’t have the capability to build such a bridge and the river traffic had to get through. The Spiral Bridge easily handled the river traffic and the wagon traffic. In 1895, there weren’t many cars around, and most people still traveled by horse and wagon. A bridge that had too steep a rise would be really hard for horses, so it was necessary, for the sake of continuing the movement of river traffic, to create a ramp of sorts so the bridge was high enough. The spiral ramp on the Spiral Bridge did just that.

With his interest in historic, and unique things, I can hardly imagine that this historic bridge would be the thing my dad would have missed. Sadly, it is not something we can go see today, because it was torn down in 1951 to make way for a high bridge that would provide a straighter entry and make modern day traffic flow more smoothly. The spiral ramp, while a great idea for wagons, slowed automobile traffic considerably. With the 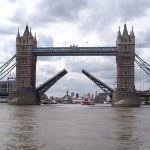 modern day automobile, came the need for a new bridge, and the Spiral Bridge, while historic and unique, was nevertheless obsolete. I suppose the builders of the new bridge were excited to see a brand new, modern bridge take the place of the old, outdated bridge, but I like antiques. Houses, bridges, furniture, and even cars, provided that I don’t have to drive them much, all hold my interest, but there are people who prefer to have everything very modern. I suppose too, that it was a necessity, and they just couldn’t move the new one to a different location. Whatever the case may have been, I’m glad my Aunt Ruth and Uncle Jim got to see it, and I really hope my dad and the rest of the family did too. It was a little bit of history that I know they would have loved. Bridges are cool, but the Spiral Bridge was amazing.