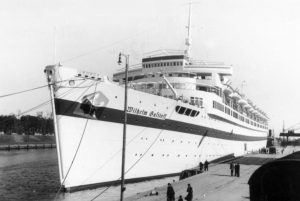 When we think of disasters at sea, Titanic is the first ship that most likely comes to mind, and while Titanic was a terrible tragedy, it was not the worst disaster at sea, by any means. It is amazing to me, however, that some of the others are never talked about at all, and in fact, you may have never heard about them. Titanic had a capacity of 3547 people, but was only carrying 2223 with passengers and crew. The loss of more than 1500 lives, was horrific to be sure, but it was not the worst disaster at sea in history. That distinction goes to The Wilhelm Gustloff.

The Wilhelm Gustloff was built by the Blohm & Voss shipyards. It measured 684 feet 1 inch long by 77 feet 5 inches wide with a capacity of 25,484 gross register tons. The ship was launched on 5 May 1937. Originally the ship was intended to be named Adolf Hitler, but was named after Wilhelm Gustloff, a leader of the National Socialist Party’s Swiss branch, who had been assassinated by a Jewish medical student in 1936. Hitler decided on the name change after sitting next to Gustloff’s widow during his memorial service. I guess Hitler managed to do a few nice things in his horrid lifetime. The ship was the first purpose-built cruise liner for the German Labour Front or Deutsche Arbeitsfront, 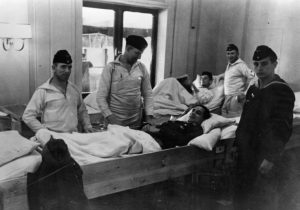 DAF and used by subsidiary organization Kraft durch Freude, KdF meaning Strength Through Joy. The purpose of the ship was to provide recreational and cultural activities for German functionaries and workers, including concerts, cruises, and other holiday trips, and as a public relations tool, to present “a more acceptable image of the Third Reich.” She was the flagship of the KdF cruise fleet, her last civilian role, until the spring of 1939.

The Wilhelm Gustloff became a German hospital ship from September 1939 to November 1940, with its official designation being Lazarettschiff. Then, beginning on 20 November 1940, the medical equipment was removed from the ship and she was repainted from the hospital ship colors of white with a green stripe to standard naval grey. As a consequence of the British blockade of the German coastline, she was used as a barracks ship for approximately 1,000 U-boat trainees of the 2nd Submarine Training Division in the port of Gdynia, which had been occupied by Germany and renamed Gotenhafen. The ship was based near Danzig. Then, as things started to go from bad to worse during World War II, the Germans decided that they needed to evacuate as many people as possible from Courland, East Prussia and Danzig, West Prussia. On 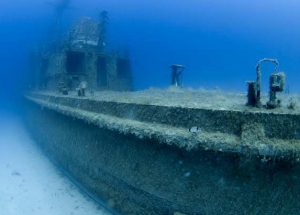 January 30, 1945 during Operation Hannibal, which was the naval evacuation of German troops and civilians from Courland, East Prussia, and Danzig, West Prussia as the Soviet Army advanced. The Wilhelm Gustloff’s final voyage was to evacuate German refugees and military personnel as well as technicians who worked at advanced weapon bases in the Baltic from Gdynia, then known to the Germans as Gotenhafen, to Kiel. The ship’s capacity was 1465, but because they were evacuating people, about 9,400 people were onboard. The ship was hit by a torpedo from Soviet submarine S-13 in the Baltic Sea. It quickly sank, taking all 9,400 people with it. The loss of the Wilhelm Gustloff remains the worst disaster at sea in history.