It has been a year and three months now, since our family had any members who weren’t fully licensed to drive. Nevertheless, it seems like only yesterday that I was taking my young grandchildren to school and then daycare. Those were special days…days of watching with great interest as those four little people grew up and became the people they were destined to be as adults. Of course, these days I almost never take the kids anywhere, unless their vehicle is broke down or we are going somewhere together, and even then, they are experienced drivers now, so I never hear the little kid things where driving is concerned.

When they were little, however, things we very different. Those kids learned very quickly how to get to the places they needed to go. If you took a wrong turn, or went a different route, they were quick to tell you that you were going the wrong way. I always found myself quite amazed that these little kids could know the way to places they went. I just didn’t exoect them to be paying that much attention, I guess. I found out, that kids pay quite a bit of attention to things, if they think it is important to the adults. They like to mimic the adults, so if we think something is important, so do they.

My oldest grandson, Christopher Petersen proved this to be the case, when he gave me driving lessons. Now, I remind you that kids love to listen to their parents and repeat everything they say. And some parents take advantage of that by telling their little ones the goofiest things to say. Well, my son-in-law, Kevin Petersen is no exception to that rule. In trying to teach his son the meaning of the traffic lights, and believe me, I use the term teach loosely, Kevin started telling him what the light colors meant. 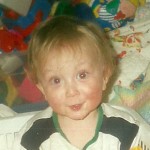 was explaining to me one day what his dad had taught him. He told me that he knew that the green light meant go. So I asked what the red light meant. He told me that it meant stop. I was impressed at his grasp of the system, so I asked what the yellow light meant, and Christopher promptly told me that it meant to go faster and faster! Of course, that comment brought roaring laughter, which made Christopher feel very proud of himself. That was what brought about all the repeat performances of his driving lessons. Looking back now, I find just how much I miss those days when the grandchildren were little and so innocent and funny. I love who they have become, but the children they were…well, they were very special too. I am very blessed.

Many people name their children a longer name, planning to shorten it to a nickname. Names like Christopher and Joshua are shortened to Chris and Josh. Some times, names are changed to initials. Names like Joel David, Machelle, or Brenda are changed to JD, MAC, or BR. Names even had things added to them, like Susan becoming Susie Q, or Shai Renee becoming Shai Reenie the Pooh. And sometimes directions came into play when Weston and Easton became West and East. And some names didn’t need to be changed, just used in their entirety to be a nickname of sorts, like Caalab Rolles Royce. Such is the case in our family, but I guess I had to be different. I never intended to use nicknames for my girls, Corrie and Amy, and for the most part didn’t, but the nicknames they did get, didn’t shorten their names…rather, they lengthened them. Odd…I know, but that is what happened.

Corrie became Cornelia…after my grandfather according to my mom. Amy became Amelia, mostly I think to match Corrie’s nickname, but it was all so perfect. Their names were similar and fit perfectly to lengthen their names from the original to the new nickname. We had a lot of fun with those new longer nicknames, but it never escaped my notice that they were of an unusual type.

Everyone had their little additions. Some added middle names so Cornelia became Cornelia Sue. Other made rhymes, so Amelia became Amelia Bedelia. The play on words was fun and interesting. We even had a few little songs that incorporated their nicknames. Just another way of adding to the fun of it. And through the years, more and more nick names have been added…some short and some long. Corrie has been Cor, CorSue, Corrie Lou, and even Apple Core, and Amy has been Ames, Amos, Amy Lou and Strawberry Shortcake, because she was so little. The names changed through the years, but never really went away.

The other night at bowling, Amy came up to me and said that Pete, another bowler, had called her Amelia, and was surprised when she turned around and responded to the use of the nickname. He said, “I didn’t figure you would answer to that name.” She said, “It has been my nickname all my life.” So I guess nicknames, don’t always mean a shortening of the name, and it isn’t so uncommon for nicknames to be a lengthening of the name. But, what is really funny to me is that when we picked names for the girls, I said I didn’t want names that would be shortened…and well, I guess I got my wish…at least part of the time.