I grew up in a time when western shows were all the rage on television. One show that my family always watched was Daniel Boone. Most people know Daniel Boone from their history classes, as an American frontiersman. Most of his fame stemmed from his exploits during the exploration and settlement of Kentucky. Boone arrived in Kentucky in 1767, about 25 years before it became a state on June 1, 1792. He spent the next 30 years exploring and settling the lands of Kentucky, including carving out the Wilderness Road and building the settlement station of Boonesboro. Without Boone the history of Kentucky would have been much different.

Boone was born near Reading, in Berks County, Pennsylvania, the son of hard-working but adventurous Quaker parents. He learned some blacksmithing, but had very little formal education. Daniel appears to have been a scrappy lad who loved hunting, the wilderness, and independence. When his parents left Pennsylvania in 1750 bound for the Yadkin valley of northwest North Carolina, Daniel went along willingly, because the move fit right in with his spirit of adventure.

Upon arriving in North Carolina, the cutting edge of the frontier, he was able to indulge his hunting prowess and love of the wilderness. In the years that followed, he served as a wagoner with General Edward Braddock’s ill-fated expedition to Fort Duquesne in 1755. Boone then married a neighbor’s daughter, Rebecca Bryan, in 1756, and in 1758 is believed to have been a wagoner with General John Forbes who was hacking out the road to Fort Duquesne, which he rebuilt as Fort Pitt…now Pittsburgh. Back in North Carolina, Daniel purchased land from his father but never seriously engaged in farming. He loved to roam far too much to settle down and farm the land in one place. In 1763 he and his brother Squire journeyed to Florida, but for unknown reasons they did not stay. I guess Kentucky would always be his first love.

Boone was first in eastern Kentucky in 1767, but his expedition of 1769-1771 is more widely known. With a small party Boone advanced along the Warrior’s Path into a beautiful garden-like region. When the time came for the party to return he remained behind in the wilderness until March 1771. On the way home, he and his brother were robbed by Indians of their deer skins and pelts, but the two remained exuberant over the land known as “Kentuck.”

So much did Daniel love that “dark and bloody ground” that he tried to return in 1773, taking forty settlers with him, but the Indians drove them back. The next year he went again into the region carrying a warning of Indian troubles to Governor John Murray Dunmore’s surveyors. As Judge Richard Henderson was concluding the Treaty of Sycamore Shoals. in March 1775, by which much of Kentucky was sold to his Transylvania Company, Boone was hacking out the Wilderness Road. As soon as he reached his destination, he began building Boonesboro, one of several stations, or forts under construction at that time. For the next four years…through 1778…Boone was a captain in the militia, and was busy defending the settlements. His leadership

helped save the three remaining Kentucky stations, Boonesboro, Logan’s (St. Asaph’s), and Harrodsburg. These were years of many ambushes; such as Blue Licks in 1778; captures, including Boone, himself, who was was captured but escaped from the Shawnees; rescues, and desperate defenses.

I knew and have learned much about Daniel Boone over the years, but for me the most interesting thing I have learned is that Daniel Boone is my 5th Cousin 8 times removed, on the Pattan side of my mother, Collene Spencer’s family. It is a small, small world. Today is Daniel Boone Day. It is a day to remember all this great man did for our country.

Blazing A Trail To The West 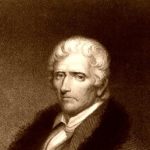 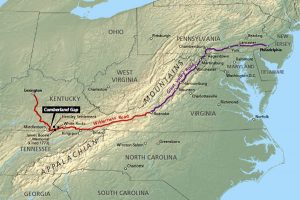 In 1775, Daniel Boone blazed a trail through the Cumberland Gap…a notch in the Appalachian Mountains located near the intersection of Kentucky, Virginia and Tennessee…through the interior of Kentucky and to the Ohio River. That might not seem like such a big deal, but the trail, which became known as the Wilderness Road, would serve as the pathway to the western United States for some 300,000 settlers over the next 35 years. The path that Boone pioneered led to the establishment of the first settlements in Kentucky, including Boonesboro; and to Kentucky’s admission to the Union as the 15th state in 1792. Of course, Daniel Boone wasn’t the first human being to ever use the trail. The earliest origins of the Wilderness Road were the trails, created by the great herds of buffalo that once roamed the region. Then came the Native American tribes such as the Cherokee and Shawnee, who used the trails to make attacks on each other. They called the trail the Athowominee, which means “Path of the Armed Ones” or “The Great Warrior’s Path.” In 1673, a young man named Gabriel Arthur, became the first white settler known to have crossed through the Cumberland Gap using part of what would become the Wilderness Road. Of course, it wasn’t his choice to go. The Shawnee warriors captured Arthur and forced him to go with them, before releasing him later. I’m quite sure he would have gladly forgone the honor of being the first white man on the trail, if it meant that he would not be taken prisoner.

Another expedition, led by Dr Thomas Walker set out in 1750, from Virginia with the aim of exploring lands further west for potential settlement. Discouraged by the rough terrain in southeastern Kentucky, the group turned back, but Walker’s detailed report of the expedition proved to be an invaluable resource for later expeditions, including Boone’s. Having hiked some pretty tough trails, I can say that I can understand the idea of turning back. I’ve never turned back on a trail, but then I’m not camping out on my trails either. Freezing cold in the nights and searing heat in the daytime, could make for a very rough trip.

In 1773, Boone attempted to lead his family and several others to settle in Kentucky, but Cherokee Indians attacked the group, and two of the would-be settlers, including Boone’s son James, were killed. Two years later, a group of wealthy investors headed up by Judge Richard Henderson of North Carolina formed the Transylvania Company, to colonize the rich lands around the Kentucky River and establish Kentucky as the 14th colony. They decided to hire Boone, who’s knowledge of the existing trails was well known, to blaze a new trail through the Cumberland Gap. Henderson decided to approach the Cherokee directly, and in March 1775 his associates negotiated with the Cherokee to purchase the land between the Cumberland and Kentucky rivers, a total of some 20 million acres, for 10,000 pounds of goods.

On March 10, 1775, Boone and around 30 other ax-wielding road cutters, including his brother and son-in-law, set off from the Long Island of Holston River, a sacred Cherokee treaty site located in present day Kingsport, Tennessee. From there they traveled north along a portion of the Great Warrior’s Path, heading through Moccasin Gap in the Clinch Mountains. They Avoided Troublesome Creek, which had plagued previous travelers along the route, and crossed the Clinch River, near what is now Speers Ferry, Virginia. Then they followed Stock Creek, crossed Powell Mountain through Kane’s Gap and headed into the Powell River Valley. About 20 miles from the Cumberland Gap, Boone and his party rested at Martin’s Station, a settlement near what is now Rose Hill, Virginia that had been founded by Joseph Martin in 1769. After a Native American attack, Martin and 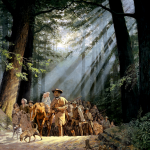 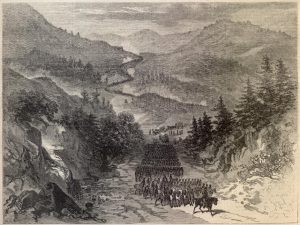 his fellow settlers had abandoned the region, but they had returned in early 1775 to build a more permanent settlement. Just before reaching their intended settlement site on the Kentucky River in late March, Boone’s group was attacked by some of the Shawnee. They had not ceded their right to Kentucky’s land, like the Cherokee. Most of Boone’s men were able to escape, but a few were killed or injured. In April, the group finally arrived on the south side of the Kentucky River, in what is now Madison County, Kentucky.