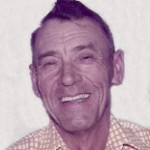 When my father-in-law is doing something that takes a lot of concentration, he always does it in a certain way. It is something he has always done. It is just  his way of concentrating. There is simply a process, or whatever it is that he is working on will not go together right. I don’t know if sticking his tongue out helps with concentration, or if it is about balancing things. Or maybe it is just like that old saying that you have to hold your tongue just right. I don’t know if this process ever really helped with what he was working on or not, but it was something he always did, and still does. He was the one who started it all…and then passed it down through the generations. 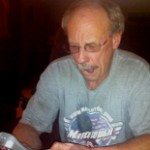 When Bob came along, the traditional method of concentration was passed on to him. He did many things his own way, as we all do, but Bob has always been very much like his dad, both in looks and actions. I remember the first time I was watching Bob work on a car part when we were dating. As he worked…deep in thought about the task at hand, out would come the tongue. And it didn’t just have to be out, it had to move around until it was positioned just right. And as the work changed, so did the tongue. I never could figure out why holding his tongue out helped. It just seemed to be the only way he could work…and have it turn out right. It was his way of concentrating, just as it had been his dad’s. 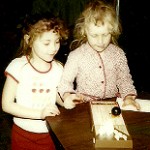 But, the biggest surprise for me was when I noticed my daughter, Amy had inherited her dad and grandpa’s method of concentration. One day, as I was watching my children enjoy a bowling game that we had given them for Christmas, I noticed that Amy was deep in concentration, trying to figure out how to get a strike, and there it was…her tongue sticking out of the side of her little mouth. It’s funny that you just don’t think about the things that you pass down to your children, until they are doing that very thing that you or your spouse did. So here she was, my little girl, with her tongue hanging out of the side of her mouth, moving it around to get it in just the right position, so that she could take her turn on the little bowling alley.