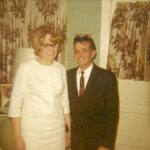 My husband’s uncle, Bobby Cole was born in South Dakota, where he lived for all of his young life. I don’t know all the details of how he met my husband’s aunt, Linda “Knox” Cole, except that they met in Colstrip, Montana, when her parents were living there. It is my thought that Bobby was working at the coal mine in Colstrip, when a certain girl caught his eye. Once he met Linda, he was smitten. He knew she was the love of his life, and he was right. They were married on December 29th, 1965, and their marriage would last until Bobby’s passing on May 30, 2014. Of course, I don’t know these details for sure, except that my husband, Bob Schulenberg told me that they met in Colstrip. I also know that Colstrip is a coal mining town…or at least a coal processing town. So, it made sense that mining and coal was the reason Bobby was there. And in the end, it was fate, I guess…or a really good move.

Bobby was raised on his parents’ farm, so the country lifestyle was in his blood, but like many kids, the idea of a change of pace can be very appealing…not to mention getting away from home. Kids, once they graduate from high school tend to either want to move out and get a job or head off to college. For Bobby, the choice was to move to Colstrip, Montana was the best decision he ever made. Once Linda and Bobby met, they never looked back. The dated a while, and then went to Las Vegas, 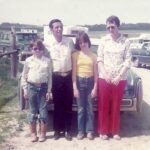 Nevada to get married. Following their wedding, Linda and Bobby would go on to have two children…a daughter, Sheila and a son, Patrick. Since that time, their lives were blessed with multiple grandchildren. While they passed away at a younger age, they lived a good life.

Eventually, life would take Linda and Bobby in an unexpected direction. After the hotel they owned in Kennebec, South Dakota, burned to the ground, they decided that since Kennebec was a small town and business was going nowhere, it was time to leave. They moved to Winnemucca, Nevada, and lived there the rest of their lives. Today would have been Bobby’s 79th birthday. Happy birthday in Heaven, Bobby. We love and miss you very much.