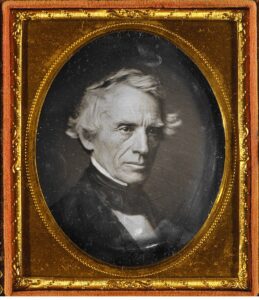 Samuel Finley Breese Morse was born on April 27, 1791, in Charlestown, Massachusetts, the first child of the pastor Jedidiah Morse (1761–1826), who was also a geographer, and his wife Elizabeth Ann Finley Breese (1766–1828). Samuel Morse was an American inventor and painter, having established his reputation as a portrait painter, but it was his work following his first wife’s death that would make his name a household word. Morse married Lucretia Pickering Walker on September 29, 1818, in Concord, New Hampshire. The couple had three children. Susan was born in 1819, Charles was born in 1823, and James was born in 1825. Shortly after giving birth to James, she died of a heart attack on February 7, 1825.

Samuel Morse was away from home, working, when he received a few letters from 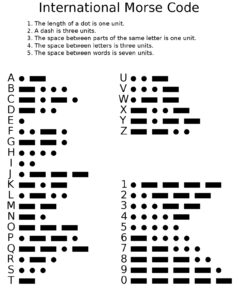 his wife, Lucretia. The first letter told him that his wife was ill and the next day, while he was packing to leave, another letter arrived, informing him that she had died. Morse rushed home, but upon his arrival, was informed that she had already been buried. It was devastating, and Morse was greatly upset with the delay in his messages. He was determined to find a better way to transmit messages. Of course, nothing could be done to change the tragic loss of Lucretia, but Morse was determined to make sure this wouldn’t happen to anyone else.

Following Lucretia’s death, Morse developed Morse code and helped to develop the commercial use of telegraphy in 1833. He also contributed to the invention of a single-wire telegraph system based on European telegraphs. By creating the 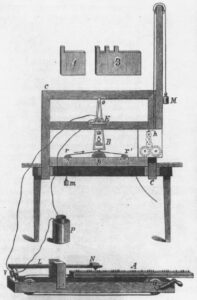 telegraph and drafting a series of dots and dashes to communicate via copper wires, 13 years after his wife died, Morse and co-developer, Charles Thomas Jackson successfully created a faster way of communicating and called it Morse Code.

While Morse code was, without doubt his most important contribution to technology, his life didn’t end there. Morse did eventually find happiness again. He married his second wife, Sarah Elizabeth Griswold on August 10, 1848, in Utica, New York. The couple had four children, Samuel was born 1849, Cornelia was born in 1851, William was born in 1853, and Edward was born in 1857. Samuel Morse died in New York City on April 2, 1872. He was interred at Green-Wood Cemetery in Brooklyn, New York. By the time of his death, his estate was valued at some $500,000, which would equal about $10.8 million today.