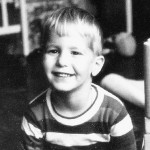 It isn’t very often that we have the chance to get just a little glimpse of what a man was really like, as a child. Oh, we might think we know what the child was like, mostly because all kids are the same…or pretty close to it, right. In reality, I think we would be very wrong. Every child is unique, and unless someone wrote things down, no one will ever really know the truth. That said, I have to say that, while I have never met my nephew, Dave Chase’s mother, Nancy, I find myself quite impressed with her anyway. I hope she doesn’t mind that I read her incredible account of her precious children. That she took the time to write about her children starting when the boys, Dave and Danny were just three and two, and later added little sister, Janie was amazing in it’s own right, but the insight she gave into the real person each of them was is even more amazing. I wish I could tell you about all three of the children, but I will focus on my niece Toni Masterson Chase’s husband, Dave.

I have always known that Dave was a smart man, but in his mother’s writings, there are so many little insights into the kind of man Dave would become. He was much that way from the time he was a child. Oh, there were the typical little three year old boy things in her writings, such as calling a helicopter, a “Heepercopter!” in a voice filled with the excitement that only a child can display. There were the typical fights with his brother Danny, just a year younger than Dave was. Yes, Dave fought with his brother, true enough, but often, he would fix the fight without letting his little brother know the truth…that Dave was kind of a softie where his brother was concerned. Still, there was something else that Dave’s mother saw in her oldest son. There was the little boy who piled all his favorite songs, poems, and sayings into his prayers to God, because it was the very best things he had to give to God.

Nancy commented on her son’s memory, which she called elephantine, when he mentioned a bee in the car the prior summer on a trip to Wyoming. Dave was just two at the time. Dave was also quite logical. When told that a girl had butterflies in her tummy, he quickly remarked that, “No girl eats BUTTERFLIES!” His remark almost 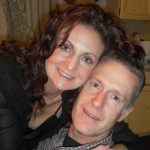 implied that no girl would have the guts to eat butterflies…and almost that maybe a boy would. Being the big brother was a big responsibility. When Dave’s baby sister, Janie arrived, he wanted to make sure she knew who he was, so he would introduce himself, saying “oo know me, baby, David Chase” repeatedly. I think Janie knew his name pretty early on. After all, he was her big brother, and he made her feel important. When given an explanation of how the sun “burned off” the fog over the base, Dave commented, “the sun is smart.” I think that this little boy was smart…and quite possibly the apple of his mother’s eye…along with his siblings of course. Today is Dave’s birthday. Nancy, thank you for this little bit of insight into your boy, who is now a special part of our family. Happy birthday Dave!! Have a great day!! We love you!! 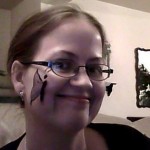 A couple of years ago, I friended Mindy and Missy Grosvenor on Facebook. They are my  first cousins once removed, but I didn’t know them very well, because I didn’t see them very often. Over the past couple of years, however, the relationship I have with the twins has completely changed. I have been treated to their special kind of humor and their wonderful personalities. The girls love kids, and they work in their mom’s daycare, babysitting, among others, their nieces and nephew…the children of their sister, Melodie and her husband, Brian. These girls have such a sweetness about them, that I can imagine that they are wonderful with the children. The girls are very kindhearted, and they have a great sense of humor. While they are a little shy, they get over that once they get to know you…and since I’m shy too, I can fully relate to shyness. Nevertheless, I doubt that they are shy around the children.

When they aren’t taking care of children, Mindy and Missy like to spend time at the mall, shopping and people watching, which is a pastime many of us like. You can get great fashion ideas, as well as seeing bad fashion things to laugh about, at the mall, and then find the very store to buy what you saw. Of course, there are very few places where you can go and have your face painted, but Mindy and Missy are young at heart, so they found a place recently, and had beautiful butterflies painted on their cheek. I like butterflies too, so I especially like that. The girls like to go to the movies too, and my mom; sister, Cheryl; niece, Jessi; and I recently ran into them when we were all going to see “The Christmas Candle” at Studio City. We all 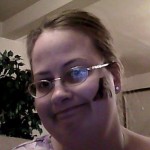 enjoyed the movie very much, and it was very nice to see the girls.

Missy and Mindy are the first of several sets of twins in our family, and so were a novelty for a while. It would be a number of years before another set of twins arrived. I always thought twins was such a cool thing…like twice as nice, I guess. I often thought it would have been cool to have a set of my own, but that was not to be, so I’m glad that I have been able to get to know these girls. That way I can share in the whole twin thing…a little bit anyway. Today is Mindy and Missy’s birthday. Happy birthday girls!! Have a wonderful day!! We love you!!

Parrot On My Shoulder 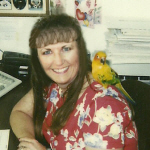 I have never really been around birds much. I do like birds and love to watch them flying. They fascinate me. The way they can float on the air on windy days. The way they chase each other around the sky. The different types and sizes. Still, I don’t have birds, and never have, and if they flew toward me, I would duck instinctively. I know, it makes no sense, but that is the way it is. I am pretty much the same way with butterflies. I don’t like having things flying at me. It freaks me out.

So you might ask how I managed to sit still for a picture with a parrot on my shoulder. Well, it was actually easier than you might think. One day, a client of ours walked into the office with a parrot on her shoulder. We were very surprised, as that is not something you see every day. Even a good bird, has a tendency to fly away if she is let outside, with or without her owner. It is simply instinct. We talked with her for a few minutes about how she managed to keep her parrot sitting on her shoulder like that, even though we knew it was simply real good training.

The bird was so beautiful, and so colorful, that in the picture you might even wonder if she is real, but I assure you that she is. Her feathers shone so brightly that they almost looked plastic, which is, I’m quite sure, the reason she doesn’t look real. And she was so well behaved. So many birds are fine with their owner, and then when they are around other people they get really nervous and skittish, but not her bird. She let us pet her and really seemed to relish it. 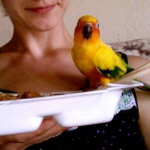 Then, she asked if we wanted to have her sit on our shoulders, and…well, you just didn’t have to ask me twice. I was very excited. The parrot, posed prettily for the picture, and then sat there totally content on my shoulder for a few minutes. I’m told that she loved to play with wet hair, but my hair was dry, and while she fiddled with it a little, she didn’t get as involved as she did with her owner, but again, I’m sure that’s normal. After a few minutes, they had to head out to finish their errands, and they were gone. We talked for a while about how amazing that was, and then went about our day too, but the memory of the parrot on my shoulder has stayed with me for many years now. 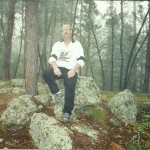 As the Independence Day holiday approaches, so does my vacation. Every year over the 4th of July week, Bob and I head to the Black Hills for a few days of hiking, sight seeing, and relaxing. It is a time of rejuvenating for us, and I always look forward to it. We will probably hike around 45 miles over the 7 days we are there, weather permitting, and we will do some of the normal touristy things that everyone who goes there does, even though we have been there many times in the past. It is a place that we will always love to go.

There is a quiet peacefulness in the Black Hills that always renews my spirit. When you get out in nature, away from the crowds and noise, your mind can relax and regroup. The stresses of a busy life melt away, and I feel refreshed again, like I can go back and take on the world again. There is nothing like a few days hiking the trails in the Black Hills to do that for me, and the anticipation is building in me moment by moment. I think this might be a long week.

Many people go to the Black Hills every year, but few realize that there is a world there that is out of sight of the normal avenues of travel. Many people are rushing here and there trying to cram 14 days of sightseeing into 7 and hoping to take away memories that will last a lifetime, because many will never come back there again. I was that way too I suppose, until Bob and I discovered hiking, and got out into the real Black Hills. Now when we go over, it isn’t the touristy sites that appeal to me the most. It is the anticipation of what new sights we will see on the trail today. Like the part of the Mickelson Trail where there must have been thousands of butterflies. They were literally everywhere, and they seemed to have no fear of people. One little guy came around us and didn’t seem to want to leave. He would fly a little ways ahead of us and land, and as we came close, he would finally move a little more. At one point we got so close we might have been able to touch him…had we tried. He seemed to be begging us to take a picture of him, 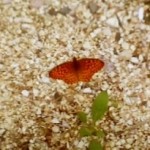 so I did, and then…satisfied, it seemed, he left.

When the week is over, we will return to our busy lives, a little sorry that our days of refreshing are over, but feeling very blessed to have been able to savour those sweet memories of a quiet time spent close to nature. It won’t be the last time we take in the elixer that is The Black Hills, but unfortunately, it will be probably another year before we get to go again, so I am thankful for the pictures, both on my computer and in my head, that will hold onto that sweetness until I am once again able to go again for a few days of refreshing in my Black Hills.