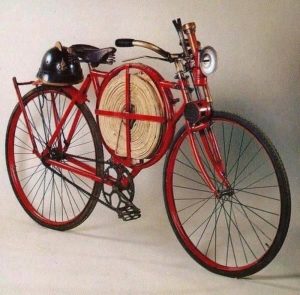 At the turn of the century, some firefighters arrived at the fire in a slightly different way than the normal truck or wagon. I don’t suppose that this was a common practice, because in most cases, it would be impractical, but for the firefighters in the workshops of Birmingham Small Arms in Great Britain, it was the normal mode of transportation. Birmingham Small Arms built a special bicycle for their firefighters. The bicycle would be an interesting way to ride to and from work, as well, but this one was to be used for a very special purpose. I would think that there might have been several businesses like Birmingham Small Arms, that utilized this type of firefighting “truck.”

The bicycle was equipped with a fire hose that could be hooked up to a hydrant, and a spindle to hold it. It also held a crowbar to get into buildings, and a flashlight so the firefighter could see to get around in the dark. The bicycle wouldn’t be practical in a big city, but for a small town, or a company yard, it was perfect. I can see where it 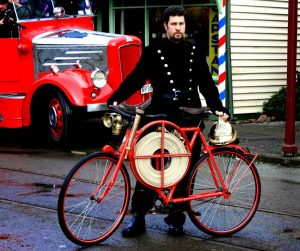 could be problematic if they tried to use the bicycle in the wintertime, but the other season would be ok for the most part.

Of course, I can see some ways in which the fire bike would not really be the best option. Fire hose has a lot of pressure, and so, would it knock the bicycle over. Also, I’m not sure how wide the firehose spindle is, but it seems to me that it could make peddling difficult. I’m not sure how heavy of how well balanced the bicycle is, but it seems like it might be top heavy. Given the possible problems with the fire bike, I think it might be best to stick with a fire truck. The modern day firetrucks are able to carry lots of other equipment that is necessary to fighting fires. They can also go most places, in all kinds of weather…just a better idea, in the long run.