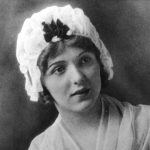 When we think of the Revolutionary war, or any other war, the people we think of are usually generals, presidents, and enemies, but in the case of the Revolutionary War, there is another name that is quite important. Her name was Betsy Ross. She became a patriotic icon in the late 19th century when stories surfaced that she had sewn the first “stars and stripes” US flag in 1776. Some say that story is doubtful, but Ross was known to have sewn flags during the Revolutionary War. Betsy was born Elizabeth Griscom on January 1, 1752, to Rebecca James Griscom and Samuel Griscom, who were both Quakers, living in the bustling colonial city of Philadelphia. As was often the case in those days, families were large, and Elizabeth was the eighth of seventeen children. Elizabeth came from generations of craftsman. Her father was a house carpenter. Elizabeth attended a Quaker school and was then apprenticed to William Webster, who was an upholsterer. In Webster’s workshop she learned to sew mattresses, chair covers and window blinds, but Betsy was a bit of a rebel, it seems. In the summer of 1773, when Betsy was 21 years old, she crossed the river to New Jersey to elope with John Ross, a fellow apprentice of Webster’s and the son of an Episcopal minister. This was a double act of defiance, and she was expelled from the Quaker church. The Rosses started their own upholstery shop, and John joined the militia. He died after barely two years of marriage. Family legend attributed John’s death to a gunpowder explosion, but illness is a more likely cause of death. Whatever the cause, Betsy found herself widowed, and exiled from her family, but Betsy was no quitter.

In the summer of 1776 or 1777, a widowed Betsy Ross received a visit from General George Washington regarding a design for a flag for the new nation. Washington and the Continental Congress had come up with the basic layout. Betsy allegedly finalized the design, arguing for stars with five points, instead of the six 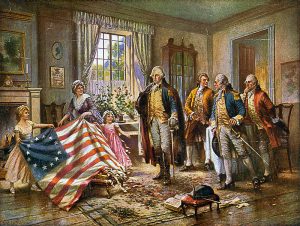 pointed stars that Washington had suggested, mainly because the cloth could be folded and cut out with a single snip. The tale of Washington’s visit to Ross was first made public in 1870, nearly a century later, by Betsy Ross’s grandson. However, the flag’s design was apparently not fixed until later than 1776 or 1777. Charles Wilson Peale’s 1779 painting of George Washington following the 1777 Battle of Princeton features a flag with six-pointed stars.

As I said, there has been some arguments as to the validity of Betsy Ross’ claim to fame as the flag’s maker, but most have been successfully disproven. Still, the fact that a painting was done with the six pointed stars is something to consider, or at least wonder about, not that I’m disputing her claim to fame. In fact, I have wondered if the painting was done that way, because of General Washington’s plan for the flag. I have also wondered why it was always said that Betsy Ross sewed the flag, because in June of 1777, Betsy remarried, to a man named Joseph Ashburn, who was a sailor. They went on to have two daughters. In 1782 Ashburn was apprehended while working as a privateer in the West Indies and died in a British prison. A year later, Betsy married John Claypoole, a man who had grown up with her in Philadelphia’s Quaker community and had been imprisoned in England with Ashburn. A few months after their wedding, the Treaty of Paris was signed, ending the Revolutionary War. They went on to have five daughters. Over the next decades, Betsy Claypoole and her daughters sewed upholstery and made flags, banners and standards for the new nation. In 1810 she made six 18 by 24 foot garrison flags to be sent to New Orleans. The next year she made 27 flags for the Indian Department. She spent her last decade in retirement, her vision failing. She died in 1836, at age 84.

The records of the US flag’s origins are not complete, in part because at that time Americans were indifferent to 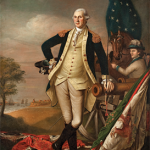 flags as national relics. “The Star-Spangled Banner” was written in 1812, but wasn’t popular until the 1840s. As the 1876 US Centennial approached, enthusiasm for the flag increased. In 1870, that Betsy Claypoole’s grandson William Canby presented the family story to the Historical Society of Pennsylvania. At the time several claims on the first flag were surfacing, ranging from other Philadelphia seamstresses to a New Hampshire quilting bee said to have fashioned the banner out of cut-up gowns. Most such stories were wishful desires to be symbols of female Revolutionary patriotism. To be women materially supporting their fighting men and, maybe to show George Washington a better way to make a star. Nevertheless, none of the stories ever took hold, except the one about Betsy Ross…or Ashburn…or Claypoole.