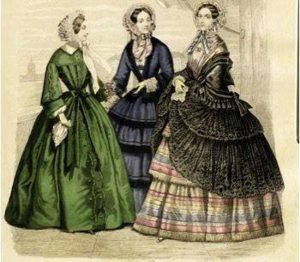 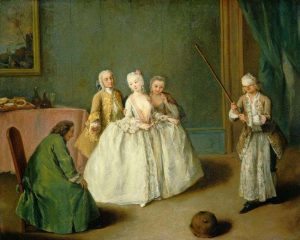 Women have always had an eye for fashion, but I can’t say that having an “eye” for fashion, is the same as having common sense for fashion. In the Victorian era, Bottle-green dresses were all the rage. I understand the love of the color green, and how a beautiful emerald green might be a coveted color. The problem occurs with the process of obtaining that color. The process used to achieve this lovely shade of green involved the fabric being dyed using large amounts of arsenic…yes, rat poison!! Some women suffered nausea, impaired vision, and skin reactions to the dye. They endured the suffering because the dresses were only worn on special occasions, thereby limiting exposure to the arsenic in the fabric. By contrast, it was the garment makers were the real sufferers. Many of them became very ill and even died to bring this trend to the fashionable set.

Another crazy style was known as Panniers, which comes from the French word “panier,” meaning “basket.” These were popular in the 17th and 18th centuries. The look involved a boxed petticoat to expanded the width of skirts and dresses. The contraption stood out on either side of the waistline…straight out!! Panniers varied in size and were made of whalebone, wood, metal, and sometimes reeds. Extremely large panniers were worn mostly on special occasions and reflected the wearer’s social status. Even the servants wore them, though in a much smaller version. Two women couldn’t walk through an entrance at the same time or sit on a couch together, because their panniers took up an entire extra seat or more. The device was also uncomfortable, limiting movement and activity.

In the 1910s, French designer Paul Poiret, who was well known as “The King of Fashion” in America, debuted the hobble skirt. The long, close-fitting skirts forced women who wore them to adopt mincing, tiny steps. True, Poiret’s design liberated women from heavy petticoats and constricting corsets. But as he said, “Yes, I freed the

bust. But I shackled the legs.” This makes me wonder why women allow their fashion ideas to come from men…who don’t have to wear the clothes they design. Some of these “fashions” were enough to make a woman faint, because her corset was too tight, and she could not get sufficient air.

During the Roaring ’20s, women no longer wanted the hourglass shape. Now the style was the boyish flapper figure. Underwear had to change to assist in this new look, and women who were “busty,” had a big problem and the underwear needed a big overhaul. The goal of every undergarment was to flatten the breasts and torso, so that flapper dresses could hang straight down without any curvaceous interruptions. Corset-makers R. and W.H. Symington invented a garment, the Symington Side Lacer, that would flatten the breasts. The wearer would slip the garment over her head and pull the straps and side laces tight to smooth out curves. Other manufacturers designed similar devices. The Miracle Reducing Rubber Brassiere was “scientifically designed without bones or lacings,” while the Bramley Corsele combined the brassiere and corset into one piece that easily layered under dresses. I wonder how anyone could breathe in these prisons known as underwear.

The Crinoline, also known as the hoop skirt, was a bell-shaped device that pushed the volume of skirts to an extreme degree. Worn in the 1800s by Victorian women, Crinolines were originally petticoats made of linen stiffened with horsehair. Wonderful…now we are wearing horsehair under our skirts. This created a big problem. It was just too hot with so many petticoats. Later, the invention of the steel cage crinoline offered the same voluminous look without the extra heat and bulk of thick petticoats. These undergarments were clumsy and hard to control, but they were also dangerous. In 1858, a young woman in Boston died when her large skirt caught embers from a fireplace in her parlor and went up in flames. It all happened to fast to save her. Nineteen such deaths occurred in a two-month period. That is a heavy price to pay in the name of fashion.

And then, there was the “Grecian bend,” the Victorian bustle. It arrived on the scene in the 1870s. The earliest version of this trend simply featured excess fabric gathered and draped at the back of a dress. Eventually, though, skirts were puffed up with large cushions filled with straw. Ladies who wore them ended up with exaggerated figures with outthrust hindquarters. The bustle was frequently a target of ridicule. This style 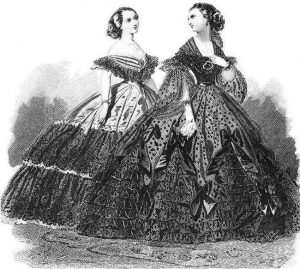 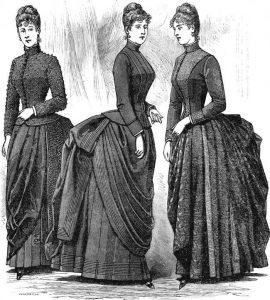 reminds me of the “padded seat” of modern day leggings, though the modern day version isn’t quite so exaggerated. In 1868, Laura Redden Searing, using the pen name Howard Glyndon, wrote about the agony young women put themselves through for fashion in the New York Times, “If you knew the Spartan courage which is required to go through an ordeal of this sort for two or three hours at a time, you would not wonder that she has not an idea left in her head after her daily display is over,” she said. Hahahaha!! That sounds reasonable to me.