His Claim To Fame 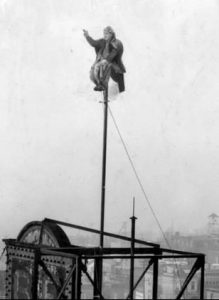 Alvin Kelly was born in Manhattan on May 11, 1893. His story began in a tragic way, because his father died before his birth and his mother died in childbirth with him. Kelly, now a newborn orphan, was raised in orphanages and passed around to various relatives. When Kelly turned 7, he started climbing onto poles and a few years later, he scaled the outside of buildings in his neighborhood…and by the way, his name wasn’t Alvin back then. It was Aloysius Anthony Kelly. He became Alvin when he ran away to go to work on a cargo ship. He was just 13 years old, and he changed his name to Alvin…probably to remain anonymous.

It wasn’t Kelly’s life as a runaway that made him unique, however, because runaways have existed for centuries. His childhood trick of climbing on poles stuck with him for the rest of his life. In fact, during the 1920s and 1930s, Kelly earned a name for himself…and a certain degree of notoriety…by sitting atop flag poles and other odd elevated perches for extended periods of time. I can’t imagine the purpose of such an act, and it’s not the most conventional way to fame, but for Alvin ‘Shipwreck’ Kelly it worked. Shipwreck Kelly, as he became known, is credited with starting the flagpole sitting fad, which, strangely, became popular in the Roaring Twenties, and he even earned a spot in the World Record Book for his sitting ability. I suppose an actor, comedian, magician, and such, needed a gimmick or a nickname, so Kelly began to use the nickname ‘Shipwreck’ claiming that he had survived the sinking of the Titanic. The story was proved to be untrue. Even then, Kelly claimed that he had many other close calls in his life. He said he had survived five shipwrecks, two plane crashes, three car accidents and one train derailment. In reality, Kelly most likely, acquired his nickname in the boxing ring. Not the greatest boxer, critics claimed he was often “adrift and ready to sink.”

As a teen and young man, Kelly hopped from job to job. His unusual ability to climb a pole and perch at the top did earn his work that he might not have otherwise been able to get. In addition to working at sea, he was a stunt pilot, movie double, steelworker, high diver, boxer, and a steeplejack. During World War I, Kelly was an ensign in the Naval Auxiliary Reserve, serving on the USS Edgar F. Luckenbach.

You might be wondering what started his Pole Sitting career. Well, like many a young man, Kelly was not one to back away from a dare. In 1924, he was dared by a friend to climb to the top of a flagpole in Philadelphia 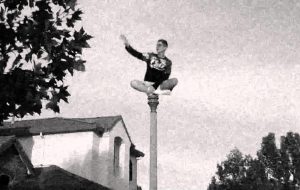 outside a local department store. Of course, Kelly jumped at the chance to prove himself. He quickly ascended the pole and perched himself on top. The stunt attracted a large crowd, many of whom then went inside to shop in the department store. The store manager asked Kelly to stay up there a while…it was good for business! Newspapers carried pictures of Kelly’s stunt, many daredevils began copying his stunt. A fad was born! Soon pole sitting was a popular trick and copycat sitters did it for laughs, on a dare, or to protest. Even though so many others were doing it now, Kelly, the original pole sitter, continued his stunts to the delight of onlookers and journalists. Everyone knew he was the original, and the others were merely copycats.

Never content, Kelly continued to look for ways to outdo his latest tricks. In 1926 in Saint Louis, he stayed perched atop a pole for seven days and one hour. The next year, in June of 1927 in Newark, New Jersey, he extended his record to twelve days. Next, it was a 23 day sit on a flagpole in Carlin’s Park in Baltimore in 1929. His final record was set in 1930 when he stayed on a flagpole on Atlantic City’s Steel Pier for 49 days and one hour. I don’t know about you, but I can’t begin to imagine such extended days sitting on a flagpole. Nevertheless, for Kelly, it seemed to be a normal part of his daily routine. Newspapers of the 1920s loved to feature photographs of Kelly “sitting high in the air, especially ones of him doing everyday things, like shaving or reading a newspaper or brushing his teeth. During his sits, Kelly rarely ate, sustaining himself on coffee and cigarettes. Although he used a leg tether as a safeguard against falling, He learned to sleep sitting upright and he explained that he slept with his thumbs stuck in holes in the pole. If he started to lean one way or the other in his sleep, the pain in his thumbs would wake him in time for him to right himself.”

Kelly toured across the country during the peak of his fame, and charged admission for people to see him sitting on a flagpole. I would find watching someone sit on a pole would be boring, but people did. He once estimated that he spent 20,613 hours sitting on flag poles in his lifetime, including about 1,400 hours in

pouring down rain and 210 hours in sub-freezing temperatures. He was often hired to do publicity stunts because business owners knew he could draw a crowd. For example, on October 13, 1939, Kelly was hired to promote National Donut Dunking Week by sitting on a pole in Manhattan and eating 13 donuts dipped in coffee. I wonder how much they paid him for that stunt.

As the Great Depression of the 1930s progressed, people became less interested in Kelly’s tricks…and less tolerant. In 1935, he attempted to break his own record again, but the Bronx police said he was creating a public nuisance. The police threatened to chop down his pole, if he didn’t come down and when he did, he was promptly arrested. His last attempt at pole sitting was in Orange, Texas, in 1952. That day, while sitting on the pole, Kelly suffered two heart attacks and was forced to come down. He announced his retirement from pole sitting and died a week later.