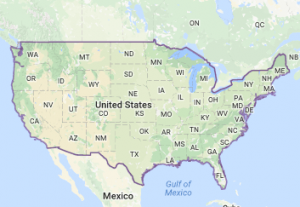 For many years the United States and Russia, at one time the Soviet Union, have had an unusual relationship. Depending on what Russia is trying to do, they might be our enemy, or they might be our ally. I understand that different nations have different goals, different values, and different motives, but it still seems odd to me that in one war, we could be allies and in another war, we become enemies. It could seem a little bit like two childhood friends, who are best friends one minute and worst enemies the next minute. The only exception would have to be the fact that trust doesn’t really fit in with the rest of the characteristics of the relationship between the United States and Russia. I suppose that becoming allies then, becomes a matter of finding an enemy who is doing things you can’t accept, and another enemy who agrees with you on your dislike of the actions of the first enemy…if that makes sense. I think that my prior statement makes as much sense as the United States being an ally of Russia, but that is what they have been…sometimes. I think the most difficult part of that kind of relationship would have to be the point when the relationship turns from ally to enemy again, because it really is inevitable. 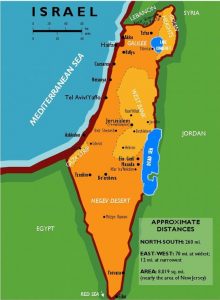 It is historical fact, that over the years the Untied States and Russia have found themselves on opposite sides of a war…even threatening to blow each other up with a nuclear bomb, but so far, both have also hesitated to take things to that level, because the start of that kind of war would likely bring inhalation, since each country has the ability to know that such an attack has started. It’s a good thing that technology has given us that ability, because if we had the nuclear bombs we now have and no way the know that an attack had commenced, one nation could easily wipe out another. Russia has often tested the United States when they have moved to attack weaker nations for the things they wanted, such as oil, food, and power. Their actions left the United States with no other options but to fight against the nation that was sometimes an ally. It has happened in the past, and it will happen again in the future, because Russia remains an enemy of Israel, and that at the very least, is a situation in which the United States would want to act. Israel has always been our ally…not a sometimes ally, and if we are able, we would protect them. At least I pray that we would. 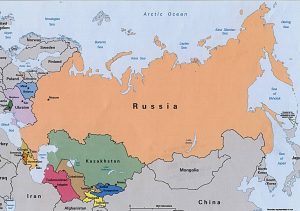 The biggest factor to affect the relationships between countries is their leaders. Most of the history of the United States has found our leaders acknowledging and even embracing our longtime, and very important friendship with Israel. Nevertheless, some leaders, like our current president, have made it clear that Israel is in a precarious position in the world. I am thankful that our president elect has told us that he will be a friend to Israel and other nations that have been oppressed by power nations in the past. It remains to be seen, exactly where Russia will be in this scenario. It is my hope that they will be an ally, but I know that they are still an enemy of our friends, and that can only make us sometimes allies. 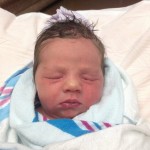 New babies are always so very special, but when the baby is your baby or your little sister, it is even more special. That’s how is was for my grand niece, Reagan Parmely yesterday morning, when she got to meet her new little sister, Hattie Joy for the first time. Reagan and Hattie are the daughters of my nephew, Eric and his wife, Ashley Parmely. To Reagan, her little sister, Hattie is absolutely the best baby in the world…because she belongs to Reagan…forever!! She will have to share her a little bit with her mom and dad… and, grandparents and all that, but I have a feeling that they will soon be told that Hattie belongs to Reagan. Hattie is a pretty little girl with lots of dark hair…much like her sister was when she was born. In fact, when I looked back at the first picture I have of little Reagan, I found that you could easily mistake them for the same baby. I seriously doubt if anyone will have trouble realizing that these two girls are sisters, because the Parmely girls are little look alikes…at least for now.

Hattie made her entrance very early on September 20, 2014, arriving at 4:06am and weighing in at 7 pounds even. Hopefully she won’t be so used to keeping her parents up all night, that it becomes a lifelong habit. I’m sure her parents will not appreciate spending all their nights trying to get their little Hattie to sleep…and later, well Hattie, there will be curfews and other such rules that you will be expected to live by…like it or not. I suppose we don’t need to jump the gun just yet. You are, after all, only one day old, so there will be time to learn all about that whole rule thing…and, I’m sure your big sister, Reagan will be happy to teach you the ropes, and how to get around the rules. Of course, you might find out that Reagan has a little bit different take on the 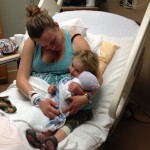 rules than your parents do…one that slants more in her direction, as the official big sister. Nevertheless, hang in there and you will find that she will be your biggest ally.

Sisters have a way of sticking together through the years, and while they may fight with each other, they are usually best friends forever. Friends may come and go, but your sister will always be your sister. You, Hattie Joy, are so blessed to have a great big sister, and yet Reagan is so blessed to have you. Being sisters is one of life’s greatest blessings. You will share so much through the years. Your years are not so far apart that you won’t go through the boy-crazy, teenage years together…among other things. Being sisters…well, it doesn’t get any cooler than that.